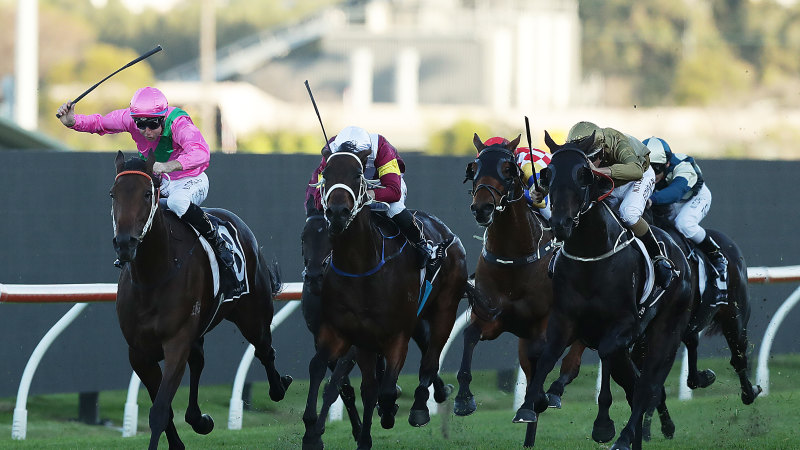 “I screamed the house down. I don’t know what the neighbours are thinking, and don’t really care,” she said.

“My hands are red-raw from clapping and straight after the race I rang Michael and burst into tears. This is what racehorse ownership is about.

It’s days like this when you want people to be here.

“I rang Jenny and she is actually the same. That was so good.

“Michael and I haven’t had a drink since the races went behind closed doors but there is a bottle of champagne in the fridge and it is going to get opened tonight.”

Michael was on course and equally delighted to see Amangiri get a deserved win.

“[Jenny] watched the race downstairs at home and she was a bit emotional. Amangiri is a family horse,” John said. “She is a lovely mare, very genuine. She is not elite but she hasn’t had much luck in the group 1 races she has contested.

“She is better on top of the ground too. We might look at the Dark Jewel Classic next but she is going to be retired at the end of the season. She will make a good mum.”

Berry had to hold his breath at the top of the straight when he looked like being blocked for a run, and knew the importance of gettting the job done. The Hawkes have been among his biggest supporters, so there was satisfaction after the post.

“It’s a family horse, and I’m not sure if Mrs Hawkes has forgiven me for the time I got beat on her a couple of preps ago yet. So it was nice to get one back,” Berry said.

“It was looking a little hairy at the top of the straight once again but it was a massive improvement getting back on top of the ground, she had those two nice runs that got her fitness to where it needed to be and she was a lot more relaxed in the run today.

“That helped her finish off late.”

Amangiri had stalked leader Archedemus and pounced in the straight with enough in hand to ward off late challenges from Live And Free and Another Dollar.

While Amangiri might take on her own sex at the Scone meeting, John O’Shea will continue with his plan to run Live And Free in the Cup.

“He has gone super,” O’Shea said. “It was always a risk over the 1500m at Rosehill that they might have gone steady and that’s what they did. His sectionals will be outstanding.

“He will be better for that run and goes to the Scone Cup. We booked Jeff Penza for that race last month and he is right on track for it.”

Previous Liberals, ALP to seek taxpayer-funded wage subsidies for political staff
Next Butterfingers are back and picking up the pieces with a new album