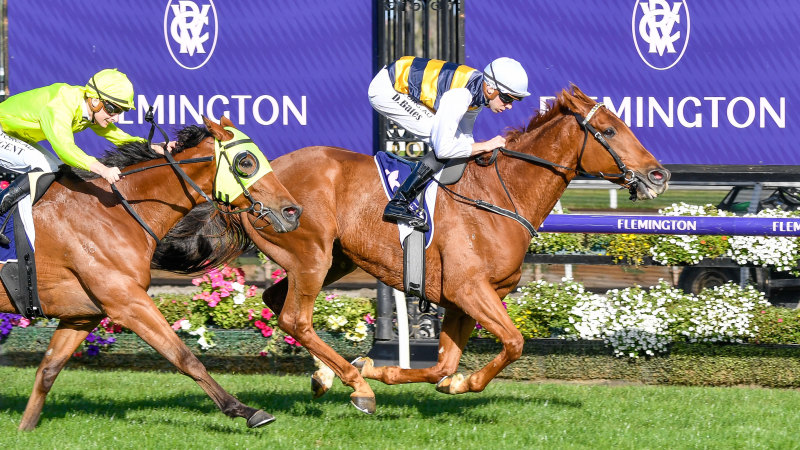 “With stayers, you have a plan. You start them off over a mile up to 2000 metres. Anyone could see that it was a good run over 2000 metres [last start].

“Stepping him up, all week I’ve been really happy with him. I drove my racing manager – my wife – mad all week that he was going to run a massive race.”

Alexander said the race panned out ideally for his horse.

“If you could design a race, it was perfect,” he said.

“The two horses [in front] were going a good gallop, we were behind them having a breather.

“He was third in the Geelong Cup. I know the Melbourne Cup winner was here, take nothing away from him. Our horse is a good horse on his day and the race went well.”

It was Haky’s fourth career win, underlining his potential again after running third in last year’s Geelong Cup to Prince Of Arran and True Self.

But Alexander said he wouldn’t be setting the bar too high with his Irish-bred stayer.

“I think he can come back in the spring. I’m not saying that he’s going to win a Melbourne Cup but he could win a nice Geelong Cup, Bendigo, Ballarat Cup, maybe just a little bit below the Melbourne Cup but where he ran today, who knows?”

Meanwhile, O’Brien said he couldn’t explain Vow And Declare’s fifth-placed finish after the Craig Williams-ridden horse seemed to get every possible chance.

“Obviously he was disappointing,” he said.

“No excuses at all. Had a perfect run.

“We’ll just see how he pulls up and work out where we go from there.”