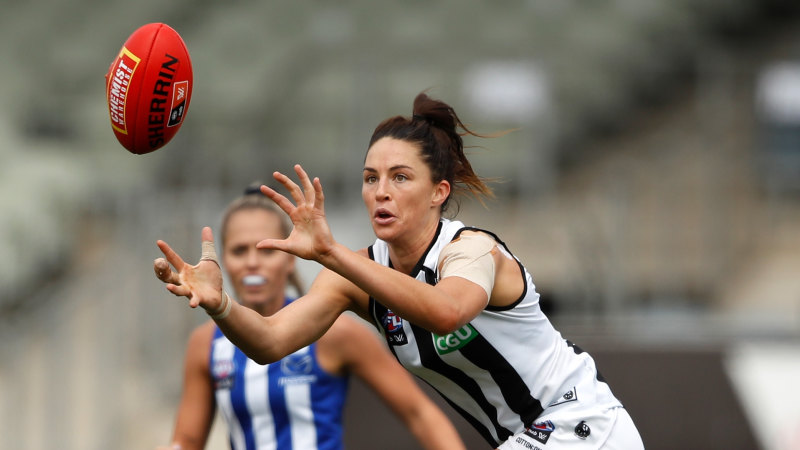 AFLW players have been promised they will have a season with all 14 sides in 2021 but cuts are expected to come across the industry and clubs, which could hit both men’s and women’s teams.

“For anyone asking those questions, they need to know we are here to stay,” Layton told The Age on Monday.

“We’ve come along in leaps and bounds. It’s not a token competition.

“The standard of the games was incredible this season and we’ve come a long way with our collective bargaining agreement and our relationship with the AFLPA and the AFL itself. Those were all exciting and big steps for the competition.

“None of that will take a backward step. We just have to sit tight and see how it looks.”

Layton showed the fruits of a year playing AFLW and VFLW in 2019 in 2020 as she was stronger in ruck contests and more confident in her skills. She said her role was to get the ball down to Collingwood’s star midfielders and then use her agility to give the side another option around the ground.

But Layton was taken aback by how she was told she was now an All-Australian player since the league’s formal awards night was cancelled due to the COVID-19 pandemic.

Instead her club found a way to surprise her with the news.

“She told me I was doing a meditation with one of the psychologists from our team and I love meditation. I was like, ‘We should do this for all the girls.’

“It will be such a funny video as she tells me to breathe in and say ‘calm’, then breathe out and say ‘clear’.

“She said breathe in and say ‘calm’, breathe out and say, ‘I’m the All-Australian ruck’.

“I said, ‘What?’ When you get caught off guard, it shows it means more to you than you originally think because I just started crying.”

The AFLW All-Australian side 2020 was selected by an eight-person panel chaired by Livingstone.

The AFLW will host a special AFLW Awards broadcast to announce individual award winners on Tuesday starting at 7pm with Fox Footy showing the broadcast and the AFL website and AFLW app streaming the event.

Previous TAFE moves courses online for start of new term
Next ‘We have achieved our goal’: New Zealand ‘eliminates’ COVID-19 in the community