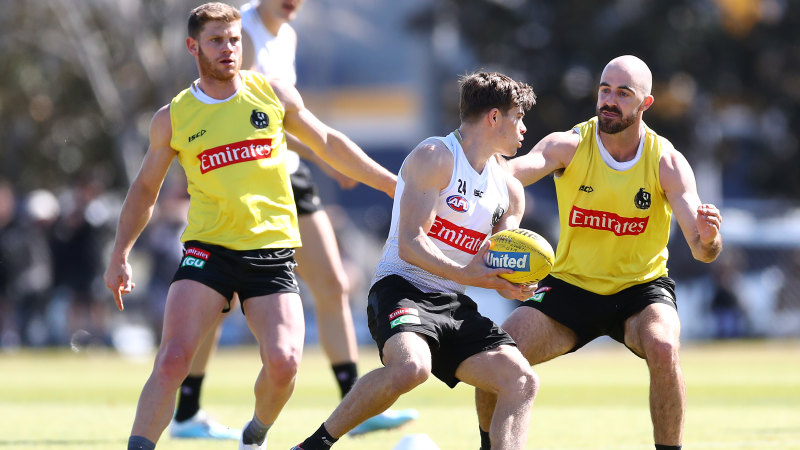 Queensland, New South Wales and Victoria remain the favourites to host hubs in the first stint.

After the first block of eight weeks, players would be able to spend a week at home.

If travel restrictions are still in place after this time, players have been told they will need to move into a second hub for at least another eight weeks, where they would be required to play a further nine games.

Sources have told The Age that the second stint inside hubs would likely see all 18 clubs based in Victoria.

Teams that make the finals could be required to stay in the hubs for a further four weeks.

All in all, a player whose team goes all the way to the grand final could spend 20 weeks in hubs – with a one-week break – if travel restrictions are not lifted.

Several players were seeking advice from partners, family members and their managers before taking part in a survey sent by the players’ association.

The AFLPA will talk through the results of the survey when their board next meets, before responding to the AFL.

The AFLPA and the AFL will continue negotiations this week.

The discussions, however, will surround more than just the “when” and the “how”, but also the “who”.

The players’ association believes each player should be given the opportunity to bring at least one family member with them when entering the hubs.

But the league feels family requests should be dealt with on a case-by-case basis.

Star players including Rory Sloane, Jack Riewoldt and AFLPA president Patrick Dangerfield have voiced reservations about hubs, particuarly if they are to enter them without family members.

Geelong coach Chris Scott admitted he hadn’t been given all the information, but questioned whether players could spend that length of time away from home.

“At face value I can’t see the eight-week thing getting up, just with all the logistical challenges, certainly without having some sort of family interaction,” Scott said on 3AW Sportsday.

“The other side of the coin is I think there would be a lot of partners and families see their partners go back to work and start earning again.

“If that’s the sacrifice we have to make, maybe it’s worth it.”

While dates and locations are yet to be finalised, league sources have told The Age the AFL remains steadfast in its view that a public announcement on a return to play date will not be made until the week starting May 11 at the earliest.

The Australian Health Protection Principle Committee – made up of all the chief medical officers from the states and terriroties – will meet on Friday.

The AFL hopes to be given further guidance about return-to-play protocols as a result of this meeting, before those protocols are rubber-stamped by the national cabinet on May 10.