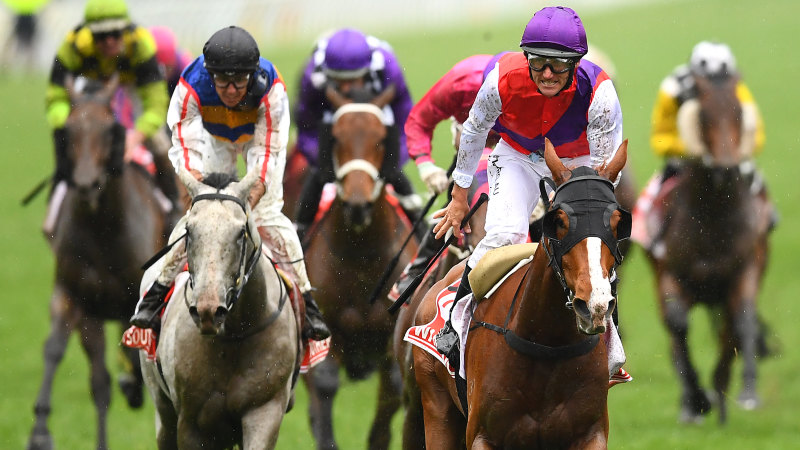 He said the VRC would work with the AFL to get the best possible outcome for Victorian sports fans. “We would have to have a think about it [going head to head],” Wilson says.

Williams, who has had six Melbourne Cup winners, believes that if anyone has to shift it should be the football code, not the racing classic.

“Gil McLachlan should realise the VRC has had those dates [the end of October/start of November] long before the AFL existed,” he says. “If they must play football in the racing territory play on a Sunday. More people in Australia and around the world watch the Melbourne Cup than the AFL grand final.”

Although Flemington is unlikely to be able to host the usual 100,000-strong crowd that throngs the track on most Derby Days, Wilson is hopeful restrictions will have been relaxed enough to at least allow between 10,000 and 30,000 on-course patrons for the fixture.

Shifting Derby Day to the following day, Sunday, November 1, to avoid any clash with the AFL should it end its season on the last day of October is another less likely option.

It would be fraught with logistical difficulties for a horse who qualifies for the great race by winning the Hotham Handicap on Derby Day, giving it only a two-day break to the Cup itself.

An October 24 finish might suit all parties more. The Age reported last month that Moonee Valley Racing Club would consider running the Cox Plate under lights, which would enable broadcaster Channel Seven to roll from the football into the country’s top weight-for-age race.

Flemington’s Cup week (which kicks off with Derby Day) is covered by Network Ten.
Wilson says the VRC is still planning for the status quo.

“It might not be the big footprint of 100,000, but we have got so much space. Unlike other stadiums where you can’t sit people away and the entries and exits are not that easy, we believe we can manage that.

“The AFL has been bouncing around a bit, and if they are now saying an end of October grand final it could be a mega day. Our preference is to hold where we are and deal with what happens … but we will reach out to the AFL and work with them to see if we can get the best outcome.”

Another possibility is for Derby Day to be staged on the Friday if the public holiday for the grand final is moved to October when the game is played this year. Normally it is the last Friday in September.

“I have not given that any thought,” says Wilson. “But the other way to look at that is that it would be a big lead-in. ‘

“We have to consider the broader Victorian industry, there’s the Cox Plate, the Caulfield Cup, the pattern of racing, so there’s a whole lot of things to think through.”