Race-by-race tips and preview for Grafton on Monday

admin May 3, 2020 Sport Comments Off on Race-by-race tips and preview for Grafton on Monday 21 Views 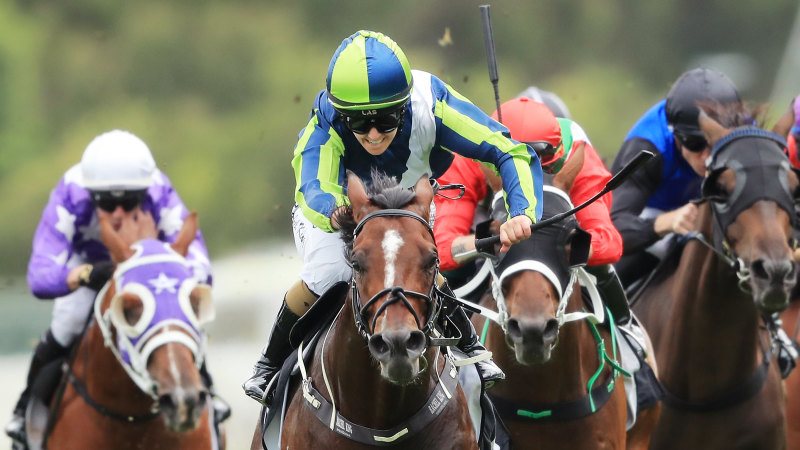 How to play it: Praeferox to win.

Tricky sprint for the girls, with a few key ones resuming. One of them, three-year-old filly 2. Divine Approach from the Gosford stable of Tony Newing, looks a real contender fresh despite the big weight and a very quiet trial. Didn’t miss a place in four runs across deeper opposition last prep, capped with a dominant off-speed win at Dubbo. Stable rarely comes this far without leaving its mark.

Dangers: Murwillumbah four-year-old mare 4. Unimpeded has worked home nicely in two runs back, but will likely have to come from a long way off them drawn wide. Port Macquarie filly 3. Sylvia’s Memory returns for her first run in more than a year off two trials. Has good early speed, but fitness will be an obvious key. Thrashed Divine Approach on debut as a hot favourite, and was competing in Listed metro company at only third start. Lightly raced Ballina filly 5. Miss Whittington stalked the speed and finished too well resuming here, and draws to get another cosy run just off the speed, but this is harder.

Now the boys’ turn same grade and trip. Hard to believe five-year-old Taree gelding 9. Pinnacle Power from the Ross Stitt yard has only won once from 30 starts, but has been placed a further seven times, and has been close-up in his last three, generally in deeper races. Draws to get a lovely trail just off the speed, and can finish over the top.

Dangers: Port Macquarie three-year-old 2. Manly Hanover defied a betting drift leading all the way resuming at home, and can repeat the dose, although tougher draw for the natural front-runner. Ballina colt 4. Sinepari also won first-up against thinner opposition, and would need to find another length at least to beat these; while resuming Murwillumbah four-year-old 1. Thunderous Strike draws to get a soft run, with the blinkers coming off, and is best of the rest.

How to play it: Pinnacle Power each-way.

Even battle here for much lower-graded stayers, and as always tactics and tempo will play a hefty role. Coffs three-year-old gelding 3. Brisbane Boy from the Joanne Hardy stable improved lengths back on top of the ground to claim his maiden at fifth run in first prep after earlier being way outclassed in much stronger metro company. Draws to get a gun run, and is ready for this longer trip.

Dangers: Kembla three-year-old filly 13. Spring Secret has had three mixed runs this prep, but was only three lengths from Tampering at Nowra first-up, and a repeat of that would see her go close. Taree mare 11. Sensational Girl hasn’t run a place in seven starts, but signalled she was improving finding the line okay from well back in a stronger Class 1 last start; while Cessnock colt 14. Snobby Shores is hard fit deep into the prep, and wasn’t far away in a better maiden here last start.

How to play it: Brisbane Boy to win.

Hard to see talented three-year-old Gold Coast filly 14. Vampirina Diamond from the Michael Costa yard getting rolled first-up from the inside draw. Hit the line hard against stronger all three runs in first prep, and will be well prepared for this journey. Expect her to be tucked away a few lengths off them, and be produced early in the straight.

Dangers: Port Macquarie three-year-old 4. Racketeering ran above himself at the Gold Coast in only second start hitting the line hard at big odds, although drawn wider. Expect sharp improvement from Murwillumbah three-year-old 1. Byron Buoy despite climbing in weight after a strange flop first-up here when solid in the market; include Port Macquarie mare 10. I’m Fluent, who has been placed five times in 14 starts and draws to get a handy trail for a leading country stable.

How to play it: Vampirina Diamond to win.

Open and one of the feature races of the day, with plenty of chances, and two runners are on the radar at different ends of the price scale. Liked the way Coffs Harbour four-year-old gelding 5. Galway from the Brett Dodson stable attacked the line late third-up off a long break in a BM 58 at home, and while this is harder, he drops in weight from a better draw, and even more capable on firmer ground.

Dangers: Under-rated six-year-old gelding 3. I’ve Got This made up plenty of late ground from a mile back third-up here in similar grade. Draws better with a little drop in weight, and extra trip another bonus. Outrageous he opened more than 50/1 in early markets. Murwillumbah six-year-old 15. Kijito is in the best form of his career storming home to just miss in a CL3 before charging late again to win this grade here. Tougher draw in better field, but step up in trip looks ideal on the quick back-up. Progressive Lismore four-year-old 7. At Witz End saluted second-up here after stalking the speed, and four of his five career wins have come at this track. Ballina five-year-old 6. See It Thru led all the way here in a CL3 two runs back before close-up in that BM 66, but likely to find it tough trying to get across from a wide barrier. Another one from Coffs, lightly raced four-year-old 8. Tower Road is hard fit, and only just missed in a Class 1 here last start, and draws to get a soft run behind the speed.

Improving four-year-old gelding 2. Exclusive from the Stephen Bennett stable at Casino saves his best for this track, with four of five career wins coming here. Came off a freshen-up and back on dry ground to power home for a dominant BM 82 win, and earlier wasn’t beaten far in a stronger Country Championship qualifier. Despite a sharp rise in weight, draws to finish over the top again.

Dangers: Lightly raced and consistent Pt Macquarie four-year-old 7. Magnalane has been freshened up via a smart trial win after a terrific closing run in the Country Championship final at Randwick. Up in weight, but loves this trip, and should be charging home again. Be surprised if one of those two doesn’t win, but local five-year-old 11. Midweek Hussler did his best work late behind Exclusive, and also has a liking for this track.

How to play it: Exclusive to win and quinella 2 and 7.

Previous ‘Proof will be in the pudding’: Beaumont narrowly wins second term
Next Man arrested hiding out on Disney island ‘tropical paradise’