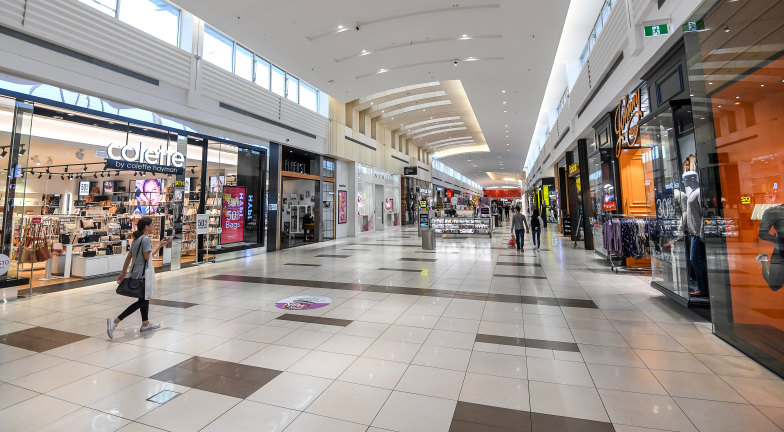 The three large banks that reported earnings over the past week – ANZ, National Australia Bank and Westpac – all pointed to retail as one of the industries on their watch lists.

Westpac, for example, nominated retail as second on its list of high-risk sectors, after property but ahead of accommodation and restaurants. Similarly, National Australia Bank listed retail as a sector of interest in relation to COVID-19.

The combination of support from the government and banks for up to six months essentially kicks the can down the road.

NAB said its exposure to discretionary retail was $7.6 billion and its department store exposure was $150 million. ANZ noted it had an $11 billion exposure to retail trade, of which 49 per cent was personal and household good retailing.

Large parts of the retailing sector were in trouble before the coronavirus emerged, and there is an expectation the pandemic will see many unable to survive. The combination of support from the government and banks for up to six months essentially kicks the can down the road.

And while banks will resist taking any action that would exacerbate the situation, they have been careful not to extend additional liquidity to some retailers and placed others on watch lists.

The flip side of the coin is that a handful of retailers have seen their sales jump thanks to consumers’ changing spending patterns during the pandemic.

Supermarkets are obvious short-term beneficiaries, but aberrant shopping behaviour spurred by stockpiling groceries in the early days of COVID-19 is ostensibly over and revenue is forecast to return to normal levels.

Others, such as JB Hi-Fi this week, provided a stunning insight into being in the right categories at the right time. Stronger-than-expected third quarter sales growth of 11.6 per cent in its Australian stores and and a 13.9 per cent jump at its Good Guys brand suggests that sales in the last week of March were up 37 per cent in JB Hi-Fi stores and 45 per cent at the Good Guys, according to analysis by UBS.

And JB Hi-Fi has flagged the sales momentum continued through April and May.

Wesfarmers also appears to be a COVID-19 beneficiary in parts of its conglomerate – having booked strong sales at Bunnings and Officeworks but suffered from the poor performance of Target, which has spurred another review of its discount department store.

Target is a classic example of a retail brand that had been struggling before the coronavirus outbreak and may not survive the pandemic. Indeed, had Target not had the support of the larger Wesfarmers group, it would arguably have not lasted until now.

Myer, which closed its doors in response to falling sales and the distancing measures during COVID-19, is another retailer whose future shape is the subject of some speculation. Its performance has been disappointing for years as it labours under the burden of lease commitments it has struggled to lower.

For the broader retail sector, the banks have been signalling that once the immediate assistance measures wind up around September, things will change.

In a letter to shareholders NAB chairman Phil Chronican and chief executive Ross McEwan made it clear there was potentially fatal pain ahead for some businesses.

“While we are here in support of every business customer, we will be honest and upfront with those who struggled before this crisis that their operations may not survive it with or without our support,” the bankers wrote. “It is the responsible thing to do.”

The charges were made against Sony Europe, which is incorporated in the UK and provides …