Not stoning the Crows: featherlight penalty for delicate times

admin May 11, 2020 Latest News Comments Off on Not stoning the Crows: featherlight penalty for delicate times 50 Views 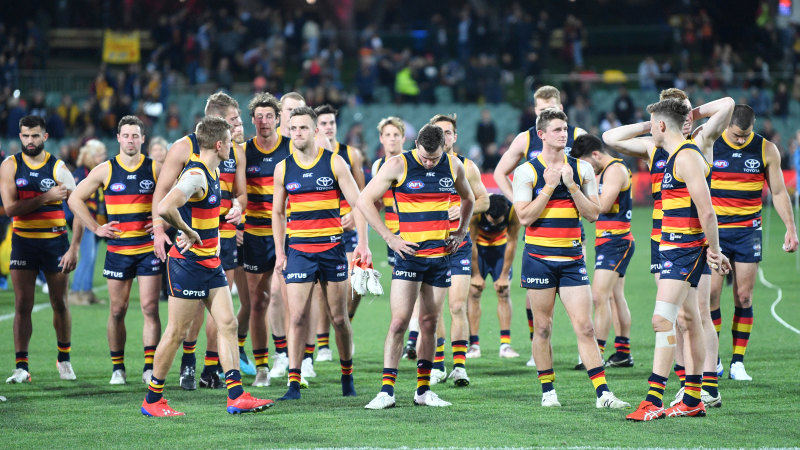 At the best of times, footballers are not sticklers for detail, outsourcing that to managers and coaches. That’s why assistant coach Ben Hart has copped it.

Perhaps the mental health of the players also was taken into account. As a community, even while understanding the rationale for the lockdown, we’re feeling a bit fragile. Footballers aren’t immune. In the end, all the Crows 16 did was what they do: they had a kick. Somehow, it would have felt harsh to send them down for that.

And yet, still the sanctions appear light on. The onus is on all of us to knuckle under, and mostly we’ve complied. Chafed, but complied. In that light, you could argue that this is another case of mollycoddled sportsmen flaunting their privilege. But that would be an odd characterisation of 10 minutes of kick-to-kick.

In the normal course of events, the Crows should have been grimacing and licking their wounds. But the events of the last two months have run far from a normal course.

What else could the AFL have done? A hefty fine was thought to be the minimum acceptable penalty.

But now that the lean times have come for all of the AFL, what would be the point pinching tighter still? Even at a rich club like Adelaide, the well is not bottomless. The only guarantee anyone has is the AFL’s own $600 million line of credit. Chances are the AFL effectively would have had to pay its own fine.

Loss of draft picks? History says the effect is too draconian, even when levied against knowing, calculating cheats, which Adelaide is not. Always when dealing with rule breaches, the AFL has to walk a fine line between punishing a club and damaging it.

That leaves only fully fledged suspensions. But 16 at a time would have been too many at one club. It would have been tantamount to docking the Crows premiership points, a rarely applied penalty. In an already abridged season, that would have hurt even more. Not much is expected of the Crows anyway this year, but that does not make them dispensable on the scales of justice.

In the normal course of events, the Crows should have been grimacing and licking their wounds on Monday night. But the events of the last two months have run far from a normal course. In civilian life, with few but shrill exceptions, we’re dealing with it by giving each other a bit more room and showing each other a bit more understanding than usual.

Now that quality of mercy has been extended to the Adelaide Crows. That won’t sit well with everyone. But here’s another way to look at it. What the Adelaide 16 did was not the dumbest thing footballers have done this year. Widen it to all codes, and it might not be in the top five.

But if any AFL footballer at any club transgresses the new rules by even a toenail’s width once they are gazetted later this week: now that would be dumb.

Previous On TV this week: will Penny find closure in the Doctor Doctor finale?
Next Coronavirus updates LIVE: Daniel Andrews to ease COVID-19 restrictions on Victoria from Wednesday as NSW, QLD students return to classrooms, Australian death toll stands at 97