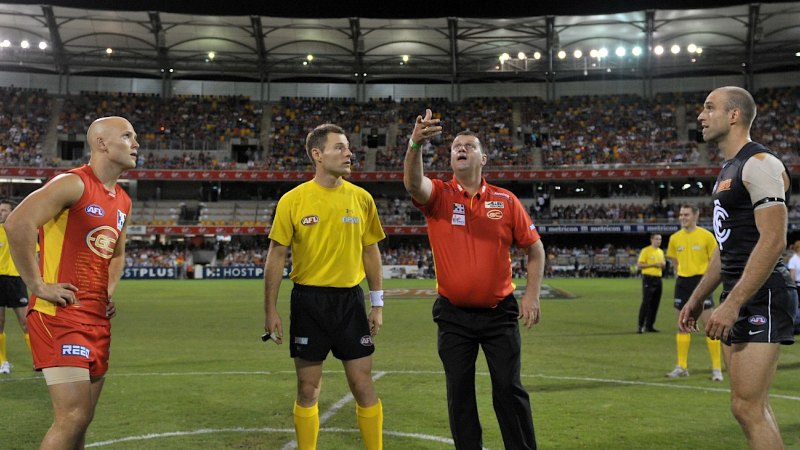 Melbourne coach Simon Goodwin said the Demons would be willing to travel north, if it meant getting the season going.

‘‘It wouldn’t be ideal in terms of that scenario but if that what the game demands and that’s what gets the season away, I think we’re all making compromises for the betterment of the game,’’ he said on 3AW.

‘‘It certainly won’t be an excuse from our club, we just want to play.’’

South Australia has also emerged as stumbling block for the AFL, but the league remains quietly confident of a Thursday night restart on either June 11 or 18.

Victorian powerhouses Collingwood and Richmond has been flagged as a season ‘‘re-opener’’ inside AFL HQ, but that’s yet to be confirmed as league executives continued to negotiate with individual states late on Wednesday night.

With WA Premier Marc McGowan unmoved on his position, the state’s two clubs will almost certainly have to temporarily move east and the Gold Coast is looming as the preferred option.

With the Eagles and Dockers potentially joining the Lions and the Suns, that would allow three weeks of games in Queensland without either side travelling.

The AFL hopes that by that time the border restrictions have been rescinded, which would allow the WA clubs to return home.

South Australia has also caused issues with the league’s planned restart, with the state’s health authorities seeking more information from the AFL.

The most likely scenario, according to an AFL source, will lead to Adelaide and Port Adelaide playing away from home every week to start the season, with the government unlikely to let interstate clubs to fly in to play.

The issues in SA and WA have further delayed the AFL’s season restart announcement, but players are set to be told this week about return to train protocols.

According to club sources, the strong belief in the industry is that players will be allowed to train in small groups as of Monday.

Clubs are preparing to tell players they will be allowed to train in groups of eight, so that two members of staff could also be present and the group would still be adhering to COVID-19 protocols.
Moving to Victoria remains a fallback option for West Coast and Fremantle, who could be asked to play Melbourne teams away from their opponents’ preferred home ground, in order to reduce Victorian bias.

Both the Eagles and the Dockers are looking closely at the Gold Coast as a potential hub in which to base themselves if the WA borders aren’t reopened in time for the second round of the season.
But if they do temporarily move to Melbourne, league sources have confirmed to The Age that the AFL have offered them to play Victorian teams at their non-home grounds.

For example, if West Coast were forced to play a home game against Richmond in Victoria, it would be at Marvel Stadium and not the Tigers’ preferred MCG.

The opposite would apply if they were to play a Marvel Stadium club, like the Western Bulldogs or North Melbourne.

It would avoid West Coast and Fremantle playing home games at their opponent’s stronghold.

The AFL Players Association was conducting phone hook-ups with many of the clubs late last on Wednesday night, with West Australian players seeking more clarity on whether family members would be allowed to join them.

Previous V’landys gets his way with one-ref rule – so what’s next?
Next La Trobe Uni staff urged to take pay cuts to save up to 800 jobs