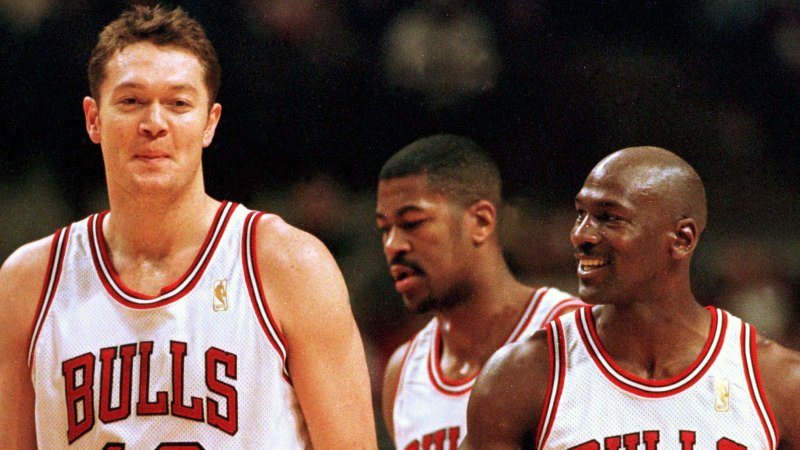 Anstey expanded on Longley when speaking to The Age on Wednesday.

“The NBA was this entertainment routine full of the some of the best athletes in the world mixed in with the players who had done it tough all their lives to earn the opportunity to support their families,” Anstey said.

“I walked into it as someone only playing the sport for five years and didn’t have that history or wasn’t connected to it compared to most NBA people.

“While he grew up playing basketball, Luc never aspired to be better than anybody or get where he got to. That came later.”

Despite Longley’s minimal appearances in The Last Dance, those who know Longley describe him as a voice of wisdom when he chooses to speak.

This is where Longley’s voice has been missed from the otherwise brilliant behind-the-scenes look at Michael Jordan and the Bulls.

Last week The Last Dance director Jason Hehir told The Age and Sydney Morning Herald budget issues and the rush to screen the documentary had stopped them being able to get to Longley in his home in Western Australia.

Hehir said the Australian didn’t stand out in the hours of team footage but that is part of Longley’s way to fade his large frame into the background.

Since the documentary began Longley has reportedly changed his phone number due to the volume of calls and media requests.

Longley was starting centre in the last three Bulls titles and the first Australian to win an NBA championship while he also played in three Olympics with the Boomers.

He wrote a book called Running with the Bulls and spoke to ESPN Australia for a documentary in 2017. He also spoke with journalist Matt Logue for his book Hoop Dreams Down Under released last year.

Anstey also recalled how Longley invited him to have dinner at his home in Chicago and how the pair joined several Bulls teammates for a night of drinks and cigars at a Dallas bar after the Mavericks upset the Bulls later that season.

Anstey noticed the centre picked up the tab and gave a generous tip that night, Anstey also revealed Longley paid over $20,000 to insure his own lucrative NBA contract so he could play at the Sydney Olympics.

The pressure the Bulls played under was something Anstey still struggles to comprehend.

“I played one game against them, it was 20 minutes of my life and we are talking about it today where as Luc spent three and a half years in that life,” Anstey said.

“It was something I’ll never forget as the memory doesn’t just become one day I played a game, it was that we found a way to succeed and win a game against them.

“It meant nothing to them but a whole bunch to us.

“Even on the way to the game people were lining the streets to see the Bulls team bus. That was Luc’s life every other day.

“The ability to remain normal and grounded through that is incredible. Many wouldn’t.

“That sort of fame goes to a young athlete’s head but Luc always spoke about fame not being real.”

Longley’s generosity has extended to the current generation of Boomers as he was an assistant coach under Andrej Lemanis between 2013 until last year’s FIBA World Cup.

Longley was someone who could relate to the NBA veterans on the team while for the NBL-based Boomers he was a sounding board and educator.

Longley also saved several Boomers from potentially life-threatening injuries when they were attacked during the infamous brawl in the Philippines walking into the scrum and pulling them away from danger.

Anstey has used his Facebook posts to share a few lessons from his career and has been blown away by the response and the chance to reconnect with old basketball mates from around the world.

He also recalled Longley spoke at length about his NBA career at the Pete’s Bar fundraiser in 2018 holding court to an audience of basketball people until the group had to leave the venue.

“But a big part of that talk was why he doesn’t do that often and the reason he was doing it was because he was around his friends and peers,” Anstey said.

“If you ever get the chance to hear Luc Longley speak then go and do it because he is one of the best story tellers I’ve heard.”

The final two episodes of The Last Dance are scheduled to appear on Netflix at 5pm Monday.

That cocktail of performance-enhancing substances immediately raised the curiosity of doping experts. “No good drugs …