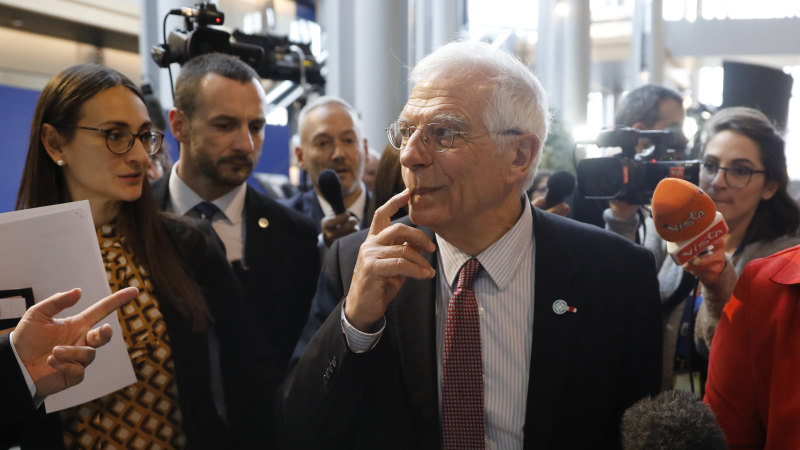 The escalation could further anger the Chinese Communist Party, which has condemned the “politically motivated” probe after the United States and Britain backed Australia’s calls. The European Union’s support bolsters the chance of the inquiry passing the World Health Organisation’s governing forum on May 18 as China canvasses support among developing nations.

Beijing hit Australia with trade strikes on $1 billion worth of beef and barley this week and used state media to warn that it could hit other key sectors if Australia continued to take an assertive stance.

Australia, a middle-power that became one of the first countries to suppress the virus, has positioned the inquiry as a key mechanism to lead the world out of the crisis. The move has angered China, which has used “wolf diplomacy” to shape the narrative of the superpower’s handling of the global pandemic.

Prime Minister Scott Morrison on Friday said Australia was “standing our ground on our values” in calling for a global review, and would work through the trade dispute with China.

In a draft motion circulated last week, the EU had only committed to “a plan for an evaluation, to be conducted in consultation with member states at the earliest appropriate moment, on lessons learnt from the international health response to COVID-19”.

Mr Borrell on Friday said the EU had become more assertive in its response to a “systemic rival promoting alternative models of governance” and urged China to play “its full role” in line with its global weight and responsibilities.

The former Spanish foreign affairs minister accused China of politicising the crisis by publicising its medical assistance to European countries.

“The changes in the EU-China relationship have been accelerating since the outbreak of the coronavirus,” he said.

In the most direct statement to date by a European leader on the rise of China, Mr Borrell said the coronavirus would reshape the political, economic and diplomatic world and that China had managed a “truly impressive” transformation that was having geopolitical consequences.

“Since diplomacy is best grounded in clear principles, the watchwords for EU-China should be trust, transparency and reciprocity,” he said. “We should move forward together, based on a realistic assessment of China’s strategic intent and the EU’s common interests.”

A spokesman for the Department of Foreign Affairs and Trade said Australia would support a European Union-led resolution to be presented to the World Health Assembly on Monday.

“It includes a proposal for an independent review into the international response to COVID-19,” he said.

“It is an important next step. We welcome the fact that many countries have joined the discussion. It is through open consultation and dialogue that the international community will learn lessons from this pandemic and position ourselves better to respond to future outbreaks.”

China is able to vote against the motion under the United Nations framework which gives sovereign powers to member states and prevents other nations from forcing independent inspectors into a country.

But in a sign China’s resistance to an investigation may be softening as global pressure builds, its ambassador to the United Kingdom, Liu Xiaoming, told Sky News UK on Friday that China will eventually allow international investigators in to the country, “but not now”.

Tedros Adhanom Ghebreyesus, the Director-General of the World Health Organisation, said in an opinion piece sent to The Sydney Morning Herald and The Age that countries need to pull together collectively on the world stage.

Dr Ghebreyesus, who has been criticised for praising China’s handling of the pandemic and has not publicly backed an investigation into its response, said the pandemic had exploited the gaps and inequalities in health systems and there can be no going back to business as usual.

“History will judge us not only on whether we got through this pandemic, but on the lessons we learned and the actions we took once it was over,” he said.

Australia, the United States and New Zealand are also expected to back a motion calling for Taiwan to be returned to observer status at the World Health Organisation after it was ousted by China in 2016. China claims sovereignty over its island neighbour, which has only had 440 confirmed cases of coronavirus despite its geographic and economic proximity to the mainland.

The motion, led by 13 countries including Belize, Guatemala and Nicaragua, inviting Taiwan to participate in the World Health Assembly as an observer has been filed with the WHO in preparation for the debate on May 18. It is expected to be blocked by China.