The lunar race: NASA lays out rules for nations staking claims on the moon

admin 2 weeks ago World News Comments Off on The lunar race: NASA lays out rules for nations staking claims on the moon 11 Views 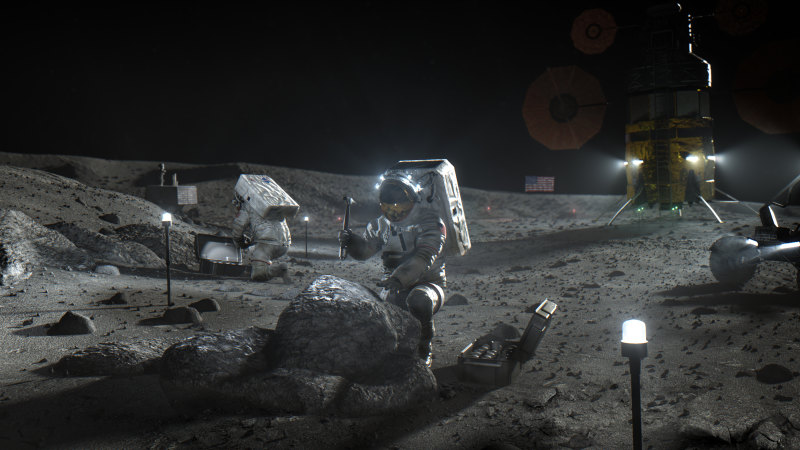 “The principles that are being put forward here is nothing that we believe any responsible spacefaring nation would disagree with,” he said.

“Via the Artemis Accords, we hope that the future will look a lot more like Star Trek, and a lot less like Star Wars by getting ahead of these issues,” Gold said.

The accords already have run into resistance from the head of Russia’s space agency, Dmitry Rogozin, who called them an invasion that would lead to another “Iraq or Afghanistan”.

NASA said it would be “premature to release” the accords ahead of sharing them with allied nations. But a copy obtained by The Washington Post said parties would be required to publicly release “the extent and general nature of operations taking place within” the safety zones “while taking into account appropriate protection of business confidential, national security, and export controlled information”.

The introduction of the accords comes as NASA is pushing to meet a White House mandate to return humans to the moon for the first time since 1972 under what it is calling the Artemis program. NASA is planning to establish a permanent presence in lunar orbit and on the surface. It is specifically interested in the moon’s south pole where there is water in the form of ice.

Still, NASA is hopeful that Russia, its longtime partner on the International Space Station, would be a signatory, Bridenstine said. The accords are just being rolled out, he said, and NASA would work with Russia, as well as many other countries.

“We encourage Russia to be a part of the Artemis accords,” Bridenstine said. “And we think it would be good for all the world to agree to the right approach to peacefully explore space.”

China, which last year landed a rover on the far side of the moon, also wants to reach the lunar south pole. NASA must get congressional approval before partnering with China in space, and that would make their participation in the accords difficult. Bridenstine said NASA would “follow the law, 100 per cent”. But he said that setting a standard of behaviour could help influence the way countries operate in space even if they are not signatories.

In pushing for the accords, Bridenstine pointed to a spent Chinese rocket stage that plummeted to Earth this week, making it one of the largest uncontrolled objects to fall from low Earth orbit in nearly 30 years. Villages in West Africa found what they believe to be debris from the rocket. But Bridenstine said had it re-entered the atmosphere earlier “it could have hit New York”.

“I can think of no better example of why we need the Artemis Accords,” he said. “It’s vital for the US to lead and establish norms of behaviour against such irresponsible activities. Space exploration should inspire hope and wonder, not fear and danger.”

Brian Weeden, the director of program planning for the Secure World Foundation, said the creation of safety zones around mining sites would not lead to nations claiming control of lunar territory. “These zones do not establish ownership,” he said. “It is more about establishing safety and coordination and that is really important.”

The accords would require signatories to adhere to principles, laid out by the United States, that would help provide a framework for acceptable behaviour in space.

Signatories would have to agree, for example, to help provide emergency assistance in the case of an injured astronaut. They would also agree to protect historic sites, such as the Apollo 11 landing area, and share scientific data.

“If you’re a country and you want to participate in the Artemis program back to the moon, this is the agreement you have to sign,” Weeden said. “The US is using these accords to promulgate some specific norms of behaviour with regard to space activity.”