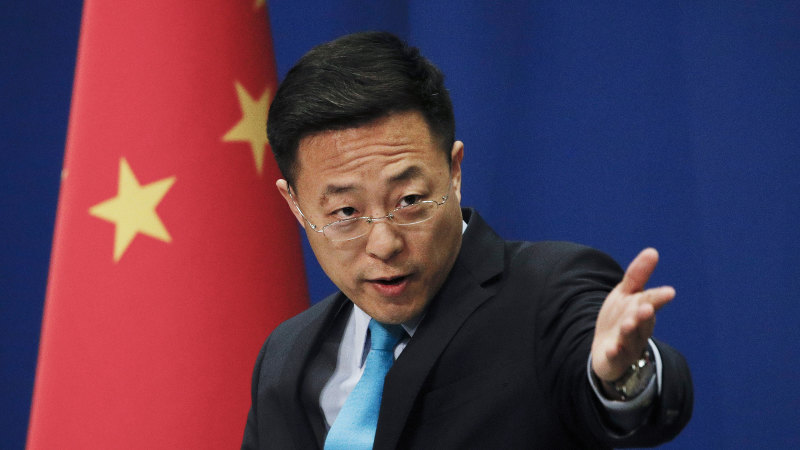 China’s embassy in Canberra on Tuesday labelled Australia’s attempts to claim credit for the imminent passage of the independent review “a joke”. China’s Foreign Ministry has sought to emphasise the European Union’s role in the motion in recent days. After weeks of negotiations China signed on as a co-sponsor for the resolution late on Tuesday. It will now pass with support from more than 120 members of the World Health Assembly.

Trade Minister Simon Birmingham accused the embassy of “cheap politicking”. “I would have thought the appropriate response from the ambassador would be to welcome [the inquiry],” he said.

The simultaneous developments highlight further deteriorating relations between Australia and its largest trading partner ahead of the final vote at the World Health Organisation’s governing body on Tuesday night.

On the eve of the virtual debate on Tuesday, US President Donald Trump threatened to withdraw World Health Organisation funding permanently after suspending US contributions in April over the WHO’s handling of the pandemic.

Mr Trump accused the World Health Organisation of an “alarming lack of independence” from China after alleging it ignored credible reports of the virus spreading in December 2019, made misleading claims about human-to-human transmission and repeatedly praised China for its transparency.

President Xi Jinping on Monday said China backed a comprehensive review of the global response to the coronavirus but said it should be conducted by the WHO and only after the pandemic had passed.

Australia’s amendments to the EU motion focused on an independent and comprehensive evaluation at the earliest possible moment, with a particular emphasis on the WHO-coordinated international health response to COVID-19.

An embassy spokesman followed up on Tuesday arguing the draft resolution on COVID-19 to be adopted by the WHA is “totally different from Australia’s proposal of an independent international review”.

“All those who know the consultation process that led to the resolution understand this,” the spokesman said. “To claim the WHA’s resolution [is] a vindication of Australia’s call is nothing but a joke.”

Agriculture Minister David Littleproud said Australia should be proud of its push for a global coronavirus investigation and the government would “probably” go to the WTO over the barley dispute. The trade umpire has been largely unable to function since the Trump administration blocked new nominations to its appellate body last year.

“The fact that Australia led the way and asked … for that review to take place, we should be damn proud as a nation that we led the world in not only on understanding what the WHO has done, but understanding what wildlife wet markets’ role is in these pandemics,” he said.

Opposition foreign affairs spokeswoman Penny Wong said Labor was pleased to see international support for the resolution, but the Australian government should clarify how the two reviews will work and explain how they deliver on what Australia has called for.