admin May 24, 2020 Victoria News Comments Off on From the Archives, 1975: Bomb destroys Footscray travel centre 43 Views 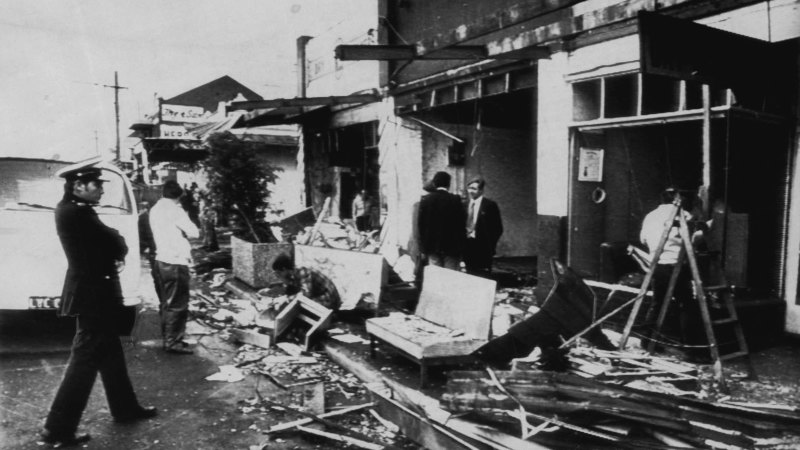 The blast tore down power lines and smashed the windows of about 20 houses.

Victoria Street was littered with broken glass and bricks.

Police said the bomb had been planted on the doorstep of the Adriatik Trade and Travel Centre and exploded soon after 4 a.m.

The front of the travel centre was blown out and office furniture, smashed to splinters, was thrown out on to the street.

All that remained was a wash basin dangling on the back wall. There was a hole about 12 inches deep where the base of the front door had been.

Police said documents and other papers, including passports, survived the blast.

Detective-Inspector F. C. Warnock, of Russell Street, said last night police had no leads in their hunt for the bomber.

He said explosive experts said the bomb was of gelignite and of “a considerable size”.

The Macedonian Orthodox Church opposite the travel centre had most of its windows smashed by the blast.

The father of a family living nearby was wakened by the blast and found his baby daughter covered in glass from a smashed bedroom window.

Mr. Laurie Fry, who lives about 75 yards away, said he heard the explosion and saw a “great ball of fire” light up his yard. “It felt like an earth tremor,” he said.

“I dived out of bed. I thought a car had gone through our house. When I got outside there were about 60 people crowded in the street. I could see there had been an explosion.”

Commonwealth police were called in late yesterday to help in the search for the bomber.

Police last night had nothing to work on but the bomb might have been planted by political extremists they said.

The Yugoslav Government opened the centre about two months ago. It has three other similar centres in Melbourne.

Inspector Warnock said these centres were not under special police watch in case of further bombings.

The Yugoslav consul-general in Melbourne (Dr. Stanisa Czetkosic) was not available for comment last night.

A member of Melbourne’s Croatian community, Mr. Joseph Cuk, denied suggestions the bombing had been committed by a Croatian.

“We are the first to be accused,” he said.

An adviser to the former Attorney-General (now Mr. Justice Murphy) said last night there had been rumors for some months about a series of bombing in Melbourne and Sydney.

He is Mr. Kerry Milte, a former superintendent of the Commonwealth Police and chief of its central crime intelligence bureau.

Mr. Milte, now senior criminologist at Melbourne University, said the Australian Government had evidence of the existence of terrorist organisations.

“The Government should act immediately to outlaw these organisations,” he said.

“We should not become a springboard for international terrorism.”

He said it had been rumored that Croatian terrorists were unhappy with the recent international air agreement between Australia and Yugoslavia.

He said it was possible Qantas could be put on the list by terrorist groups.

Previous Why Melbourne, Sydney and Brisbane should put an end to old rivalries
Next Former News Corp executive Peter Tonagh in fight to save AAP