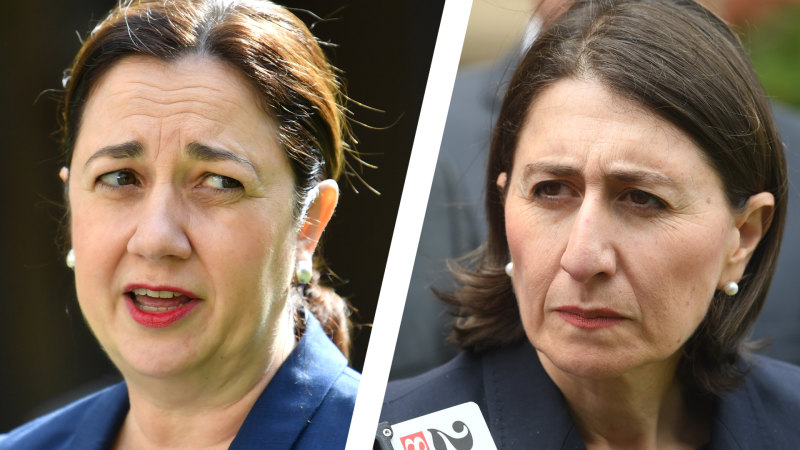 New Zealand Prime Minister Jacinda Ardern said on Monday the creation of a bubble – or safe travel zone – between Australia and New Zealand was not conditional on state border relaxation.

The Queensland legal challenge, yet to be filed, is expected to be led by a NSW silk acting pro bono for Queensland residents.

In a statement of claim, lawyers acting for Mr Palmer and his company Mineralogy say the WA restrictions should be struck down because they contravene section 92 of the Commonwealth Constitution, which provides that trade and movement among the states “shall be absolutely free”. A similar argument is expected to be made in the Queensland case.

Professor George Williams, a constitutional law expert and Dean of UNSW Law School, said section 92 was “emphatic” but the High Court had recognised some “limited exceptions”.

“I think a clear one is protecting the community from a pandemic, but even then it’s got to be reasonably done. Very likely it was valid at the height of the pandemic, but at some point a line will be crossed,” he said.

The case will turn on whether the restrictions remain reasonable and necessary, according to medical evidence, and Professor Williams said “we are in a grey area”.

“Obviously it’s getting harder and harder [to justify] but it’s not just a function of how many infections there are, it’s about the risk,” Professor Williams said.

Professor Dan Meagher, Professor and Chair in Constitutional Law at Deakin Law School, said any challenge to border restrictions “would certainly have legs”, and the states would need to show their response to the pandemic was proportionate.

“If a case was in the High Court today on the current facts, there might be a decent chance that the states would succeed,” Professor Meagher said.

“But if it was held in September and there’s strong medical evidence to suggest that community infection levels have become negligible or nothing, then the states would have a very hard time.”

Liberal National Party MP Warren Entsch, whose electorate includes Cairns, said the tourist industry “fell over a cliff” during the crisis and needed a firm date to recover.

“If we keep saying Queensland’s shut for business, by the time we do open they’re going to say ‘thank you, but no thank you because we’ve already made commitments for this year’.”

LNP MP Andrew Wallace said he hoped Ms Palaszczuk was not acting for political reasons. “I genuinely hope the premier is not using this as a political tool to assist her in a re-election bid in October,” Mr Wallace said.

“The biggest risk is in Queensland losing out to other states with people in NSW and Victoria choosing other destinations such as Byron Bay or opting for a ‘staycation’ close to home,” said John O’Sullivan, the chief executive of Experience Co, an adventure tourism company with interests in Queensland.

Steve Edmondson, who owns the Port Douglas-based Sailaway Reef and Island Tours, said he had written twice to Ms Palaszczuk to appeal to her to allow domestic tourism to resume from July.

He said the issue was in the “national interest”, with operators in Cairns threatening to stage rallies to protest what they see as intransigence on the part of the Queensland Premier.

Natassia Wheeler, the chief executive of Tourism Whitsundays, said a recent survey of local businesses had identified losses of $255 million and more than 3000 jobs.

“Look, everyone has opinions at the moment, and they are entitled to their opinions, but gee wizz our state and federal governments have done a pretty good job of keeping us safe,” the Goondiwindi Council mayor said.

Gold Coast Mayor Tom Tate has given similar support to the Premier.