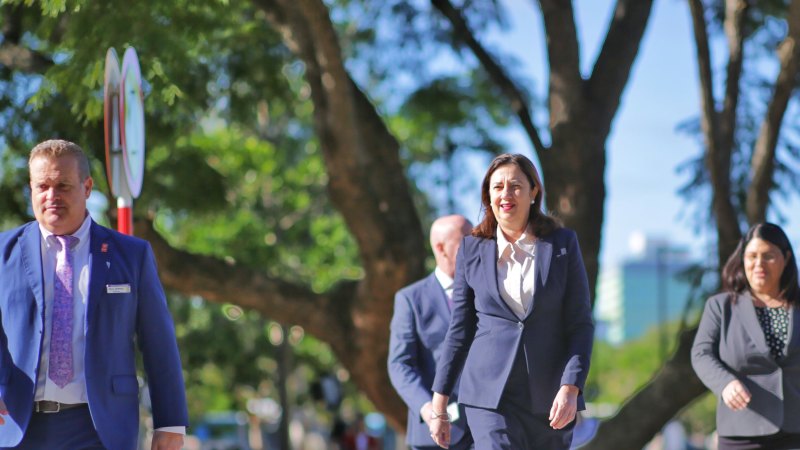 “They do data cleansing and we’re actually minus five, so we’re down to 1056,” the premier said.

“We’ve never had to report that before so we’re very happy about that.”

Two of the cases over the weekend have now been confirmed as being dealt with by New South Wales, while three others from over the last few months have been taken off the books after a review.

Palaszczuk said she was “very happy” with the state’s ability to keep infection rates low while restrictions continue to ease.

The premier marked a major milestone on Monday when all year levels at Queensland schools retired to classes for the first time since restrictions were put in place before Easter.

Ms Palaszczuk said she was happy to see classes back to full strength, but again urged any student who felt sick to stay home.

“This applies to all students, teachers, anyone in the school environment,” she said.

“If you are sick please stay at home.”

Education Minister Grace Grace said there was necessary cleaning and hygiene protocols in place to ensure the whole school community is safe.

“It is extraordinary that we are here when we were thinking a few weeks ago where we were with COVID-19, the flattening of that curve has allowed us now to welcome all the students and children back to school and it’s excellent,” Ms Grace said.

The return to school comes ahead of the second phase of the major easing of lockdown restrictions from June 12.

The major change will be an increase in the distance people will be able to travel, from 150 kilometres to 250 kilometres from their home, as well as increasing the number of people who can attend a venue from 10 to 20.

However, Ms Palaszczuk is set to meet with peak industry bodies of the hospitality sector later this week to discuss how venues can have more people inside as long as they have a social distancing plan.

“As long as everyone follow those plans, I think it is going to be very positively received by the government,” Ms Palaszczuk said.

The premier is also remaining firm on her policy not to open the state’s borders to interstate travel, after sustained attacks on the policy from tourism groups and the NSW government last week.

On Monday, Ms Palaszczuk said she would review the closures at the end of May in line with policy, but has previously stated it would likely be July at the earliest, and more likely September, before any movement was permitted over the state line.

Meanwhile, Queensland Health said there has been no further positive tests stemming from a Rockhampton nursing home where a nurse tested positive for COVID-19.

“We have completed three rounds of tests on residents and staff at North Rockhampton Nursing Centre after an enrolled nurse tested positive to COVID-19,” a spokesman said in a statement.

“To date, there have been no further positive cases at either the facility or in the Rockhampton community.”

Residents and staff who worked at the centre are being tested every four days until the incubation period passes.

The nurse at the centre of the incident had been referred to the Crime and Corruption Commission for investigation, but the CCC has now referred her case back to the Central Queensland Hospital and Health Service.

The HHS is conducting an internal investigation into the incident, with the nurse believed to have contracted the disease while on a trip to Brisbane for a doctor’s appointment, before she returned to work and felt unwell.

It’s alleged the nurse then got tested, but returned to work before her results had come in, in what would be a major breach of procedure for the public health facility.

A second independent inquiry is also being organised, with its terms of reference still be drawn up.

PIECE OF FURNITURE It’s farewell, of a sort, to one of the television industry’s great …