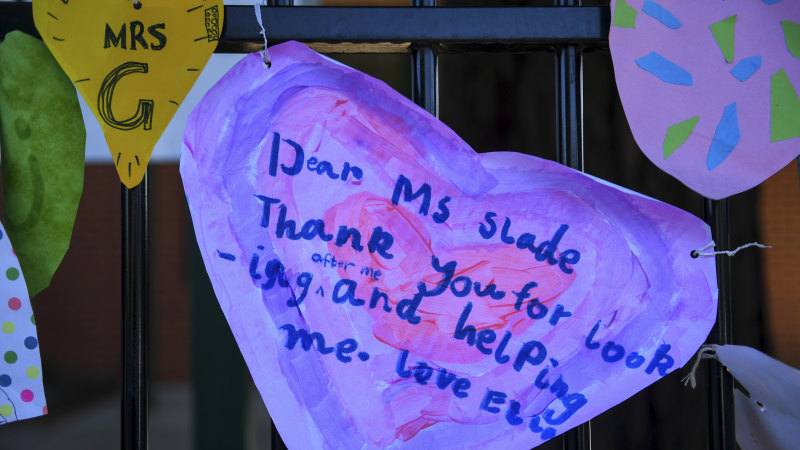 Teachers have been working from home since March, but returned to the school for a pupil-free day ahead of the return to class of grades prep, one and two on Tuesday.

They celebrated the return with a Greek feast at lunchtime.

[Teachers] have done an exceptional job in pretty tough times

Chatham Primary principal Christopher Cotching said he had never seen school staff on a learning curve as steep as the one his had been on while teaching remotely during the pandemic lockdown.

Having started the remote learning period by putting together hard-copy learning packs for parents, teachers had graduated to holding WebEx sessions and producing instructional video clips for students and parents on digital learning tool Seesaw.

“It’s just been phenomenal, particularly when they have had limited serious IT training and limited IT support provided by the department, so they’ve done an exceptional job in pretty tough times,” Mr Cotching said.

“I’ve been a principal for 26 years and I can tell you this is the zenith in terms of people’s response to difficulties and a capacity to push through and make it happen,” Mr Cotching said.

“The can-do attitude of my staff; they’re just absolutely adorable.”

The school has eschewed the Department of Education and Training’s recommendation to stagger drop-off times, and has instead allocated one of its three entry gates to each year level.

Teachers are expecting plenty of tears and separation anxiety from returning children and even parents after more than two months away.

Mr Cotching said he was also prepared for the likelihood that many will have fallen behind in their learning.

Much of the final five weeks of term two will be an exercise in catching up.

“What the challenge will be between now and the end of the term will be to forensically assess exactly where these children are, particularly in relation to literacy and numeracy.”