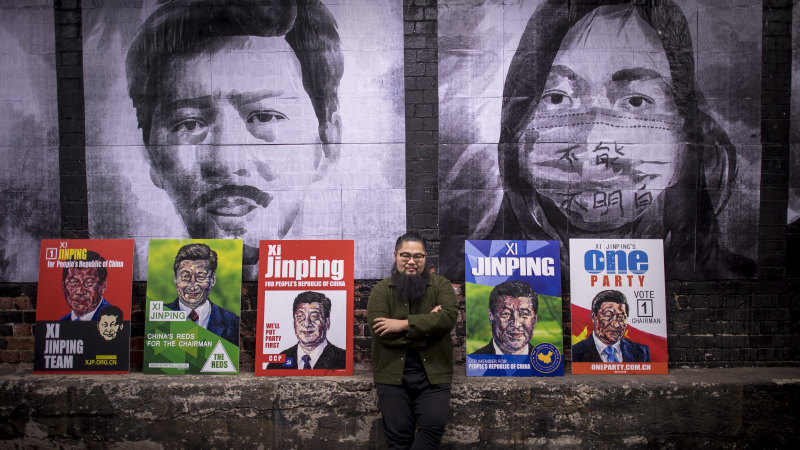 Badiucao was an anonymous street artist, described as “China’s Banksy”, until his identity was outed against his will two years ago by Chinese authorities who detained family members and threatened to have an exhibition of his art in Hong Kong raided.

The Chinese authorities do not like Badiucao’s politically charged work and the artist says the state harassment has followed him to Melbourne, where he has been followed, his phone hacked and his home broken into by people he believes are connected to the Chinese state.

He told The Age on Friday that Victoria should be extremely cautious about its closer trade relationship with such a regime.

“What we are trading is not just beef, wine and other products,” Badiucao said.

“We’re trading the foundation of this society, the wellbeing for generations and generations.

‘We’re trading the foundation of this society, the wellbeing for generations and generations.’

“Belt and Road is not purely an economic benefit project, it has a lot of political agenda.”

Public opinion among Australia’s Chinese diaspora is not easy to gauge, but Badiucao believes the fear factor of state retaliation from Beijing prevents many community members from speaking their minds on Belt and Road or other politically sensitive topics.

“The problem is that the aggression and the threat has been projected from Beijing to the community here,” he says.

“I know a lot of overseas students here in Australia are worried about expressing their true feelings about Beijing.

“You won’t hear the voice of Chinese-Australia here because most people are still afraid.”

But Chinese-Australian writer and commentator Jieh-Yung Lo says feelings within the Australian-Chinese community are more complex, with mixed feelings both about the Belt and Road Initiative and China’s rise more generally.

Mr Lo, a former Labor Party member, told The Age that the Belt and Road deal was not a clear-cut plus for Mr Andrews and Labor among Chinese Australians, but that the state government’s pursuit of closer ties with China was generally viewed positively.

But he said the biggest fear in the community as the debate raged was that Chinese-Australians might find themselves the targets of anti-Chinese feeling in the broader community.

“Our biggest fear is the potential loss of trust and confidence in Chinese-Australians by the wider Australian community,” he said.

“The last thing we want is the re-emergence of Sinophobia directed towards Chinese-Australians or anything ‘Chinese’ in Australia due to China’s rise as a global rule-maker.”

Previous ‘When the looting starts, the shooting starts’: Trump weighs in on Minneapolis protests
Next Minister flags law review after Rio blows up 46,000-yr-old Aboriginal site