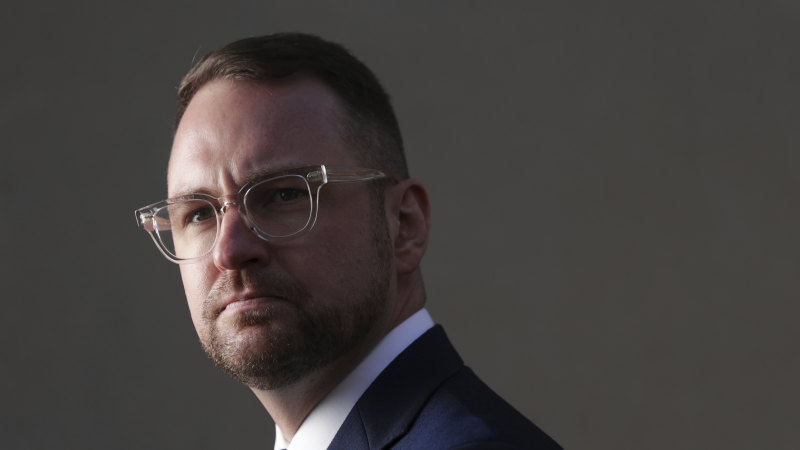 The level of payments from super funds to unions has fallen in some years and the AEC does not classify them as donations.

“Our super system needs to be strengthened and protected not undermined by Liberal backbenchers desperate for a headline,” Mr Jones said.

However, Senator Bragg said he wasn’t intending to try to ban payments but simply provide more information to the public.

The funds paid to unions are largely for services, including sponsorship fees, marketing or costs for events, and remuneration expenses to directors. Sources within the superannuation industry, who did not want to be named as the topic is sensitive, said the projections were “vastly inflated”.

Senator Bragg was particularly critical of super funds giving money to unions when the workers’ organisations had, in his view, pushed anti-worker positions by arguing against trade deals and business tax cuts.

“I’m not big on banning things but I think it should be easy to find out whether or not your super fund is supporting [Construction, Forestry, Maritime, Mining and Energy Union Victorian secretary] John Setka,” he said, adding Cbus had made payments to the CFMMEU.

A spokesman for Cbus said all partnership payments were disclosed in financial reports and online and the fund did not make political donations. The Royal Commission examined these arrangements and found them to be “rigorous” with steps in place to ensure the money was spent appropriately, he said.

In the book, Senator Bragg said anyone who looked closely at the retirement system would “appreciate the intricate alliance between industry super funds, the union movement and the Labor Party” and said industry super funds were on track to be “the biggest political donors in Australia”.

He said there should be greater disclosure requirements, particularly as super payments are mandatory, and any financial institutions with a superannuation licence should be required to disclose party-related payments in annual reports and online.

Industry Super Australia chief executive Bernie Dean dismissed the claims, saying it was “no secret” there could be improvements to the retirement system but it was one of the best in the world.

“This stuff [claims about union payments] isn’t only false and old, it reeks of a political agenda and jars with the Prime Minister’s appeal for everyone to get out of the old ideological grooves and find new ways to generate jobs and economic growth,” he said.

Australian Institute of Superannuation Trustees chief executive Eva Scheerlinck said super was one of the most highly regulated industries in the country and all funds undertake intensive reporting and disclosure to independent regulators.

“[The] Hayne Royal Commission vetted thousands of documents provided by industry funds – including those related to commercial arrangements with unions and employer associations – and found no evidence of misconduct,” Ms Scheerlinck said.

“This was in contrast to the many findings of misconduct against the for-profit retail sector. Is Bragg seriously suggesting that Commissioner Hayne got it wrong?”

She said these arrangements provided cost-efficient methods of promoting super and educating members in their workplaces and industry funds were not controlled by unions with equal representation of employer and union groups.

The Australian Council of Trade Unions has been contacted for comment.