Not Goodes: the hard choice facing footballers of colour

admin June 6, 2020 AFL Comments Off on Not Goodes: the hard choice facing footballers of colour 47 Views 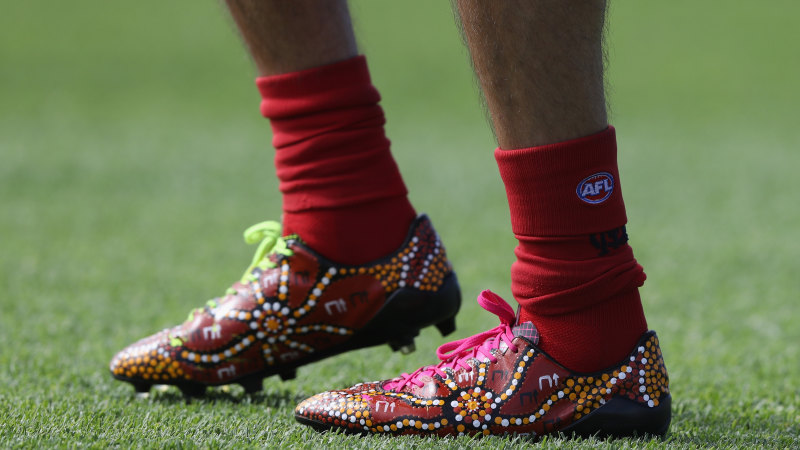 Franklin’s unexpected comment and positioning was slightly analogous to that of Michael Jordan and Tiger Woods, American sporting demi-gods with extraordinary market power who have long avoided rocking the racial boat.

Jordan, who sold untold millions of Nike shoes, famously declined to endorse an African-American running for the Senate in Jordan’s home state (North Carolina) in 1990 against the reactionary and racist Senator, Jesse Helms, quipping that, “Republicans buy sneakers too”.

But the sight of a callous cop’s knee suffocating Floyd was too much for usually apolitical Jordan, who said he stood with those “who are calling out the ingrained racism and violence towards people of colour in this country. We have had enough”.

Woods had been unwilling to criticise Donald Trump and had played golf with the incendiary president. But the footage of Floyd’s death was also too much for Tiger to bear.

Franklin is no Jordan or Woods, having never had commercial reasons for pressing mute. His reticence reflects a sportsman protective of his privacy; unlike that pair, “Buddy” has never been accessible, nor comfortable with media; his relative silence on Indigenous issues in the past is consistent with his overall silence, although he also posted on the Australia Day problem for Indigenous people on the relevant day.

It would have been intriguing to hear more on the Floyd fallout from Franklin in particular, or from Eddie Betts – who’s been on the end of horrendous racial abuse – and the game’s longest-serving Indigenous player, Shaun Burgoyne. Betts and Burgoyne opted to say nothing, at least for now.

But one can hardly blame Franklin, Betts, Burgoyne or any other Indigenous footballer for not sticking their heads up over the parapet.

The fate of Adam Goodes has not been lost on Indigenous voices within the AFL. Goodes was hooted and hounded, not for “diving” as some fans ludicrously claimed, but for the far more egregious “sin” of diving into the tempest of race relations.

There’s no question that the Goodes debacle has inhibited some current Indigenous players from voicing strong opinions.

“I’ve definitely had players say that to me,” said Tanya Hosch, the AFL’s head of inclusion and only Indigenous member of the AFL executive.

Hosch observed that clubs on occasion discouraged players from speaking out on race, with Goodes in mind. “Sometimes, it’s the clubs as well wanting them to be careful, not because they don’t think it’s a valuable thing to be talking about.

“They want to protect the players from the same impact or result [as Goodes].”

Hosch observed that Indigenous players could face a choice “between their principles and playing the game”. She added: “They’ve got the right to focus on footy, just like any other players if that’s what they want to do and they shouldn’t be criticised.”

It is not surprising that an Indigenous footballer with a social following will use that platform – which needs only a sentence – rather than subject himself to media questioning. The irony is that those social media sanctuaries have been a haven for bigoted attacks on players.

If Goodes represents a cautionary tale for mixing even mild critiques with sport, Colin Kaepernick, the quarterback who took a knee during the national anthem and was shunned by NFL franchises, has both lost and gained from his stance.

No team would touch Kaepernick, viewing his violations of patriotic correctness as radioactive, when he was good enough to be a back-up QB, at the least. Yet, Nike – the same purveyor of sneakers that helped make Jordan a billionaire – has made Kaepernick the edgy face of their company.

Nike’s genius was to recognise the market for a rebellious athlete. In a polarised society, divided not simply on race but by generational gap, a company can harvest profits from the hip and woke, much as Fox News or a talkback jock can from conservative America.

Here, however, the spoils of football are small potatoes compared with the States. An Indigenous footballer – or an African-born player such as Aliir Aliir (who recounted the experience of “shopping while black”) – won’t suffer commercially for taking up the cudgels on race, nor is he or she likely to reap rewards.

But he could be vilified on social media or clobbered by a shock jock. Anything he says can and will be used against him, more so when media and social media business models thrive on outrage.

He has something to lose – peace.

No matter what he believes, the recognised Indigenous or African footballer does not have the luxury afforded to the white player, of being able to ignore the question of race.

We must respect his or her right to speak forcefully outside of sporting boundaries. But, as with the arrested in America, they also have the right to remain silent, without suffocation.