admin 4 weeks ago Sport Comments Off on ‘Freak of nature’: Last-ditch Olympic pitch to lure Suaalii to rugby 38 Views 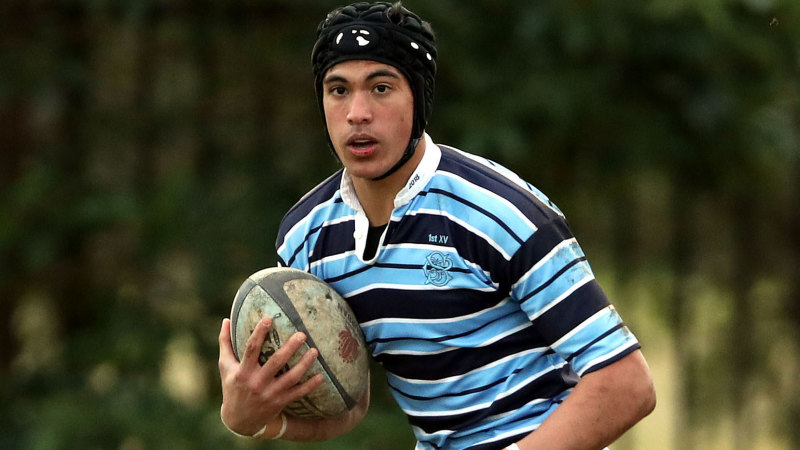 He is technically off limits to the Rabbitohs until his 17th birthday in August and will not be eligible to play first grade until 2021. But, with rave reviews from Wayne Bennett and Sam Burgess, talk is the deal is done.

RA officials do not believe this to be the case, though there is no doubt rugby is not in a position to compete with the money reportedly on offer at Souths.

The code’s decision-makers are also mindful that the hype around Suaalii does not overshadow their keen interest in another Schools and U18s winger, Newington College’s Tolu Koula, who is also straddling two codes and plays for Manly in rugby league’s SG Ball Cup.

Koula and Suaalii both starred in Australia’s drought-breaking away win over the New Zealand U18s last year and their coach, the Brumbies’ Peter Hewat, knows first hand why two major codes are so hungry to secure their signatures.

“They’re both freaks of nature athletically, they’re very mature for their age as well, and we’d love to have them in our game,” Hewat said.

“The big thing for me was just letting them play because they only needed a couple of points and then they were off. But what impressed me most was that they wanted to know all the small details in their positions, like running lines from an attack point of view and defensive positioning.

“That’s what’s so exciting about them playing rugby, because they’re already dominating without really knowing what they’re doing. So when you add in some small detail – from their eagerness to learn matched with their natural ability – the sky’s the limit.”

The coronavirus pandemic has not helped rugby’s chances, with all forms of the game shut down and the fate of this year’s Schools and U18s program not yet decided. Conversely, the NRL is already back up and running.

Rugby is also hindered by lingering uncertainty over what next year’s broadcast deal will deliver the code financially, making it impossible in the short term to give Suaalii or Koula – or any player – a concrete competing offer.

Both wingers – Suaalii in the Israel Folau-style of rangy aerial athlete, and Koula with the raw speed and power – were poised to re-join Hewat’s squad this year to attempt a repeat of last year’s watershed win over the Kiwis.

There is still a chance a series could go ahead and the arrival of highly regarded new Wallabies coach Dave Rennie will allow Australian rugby to throw everything at the youngsters.

But in the case of Suaalii, in particular, the Olympics postponement has provided an unexpected boost.

On the question of age, Olympics rules defer to the laws set out by the global governing body of each individual sport.

Rugby’s regulations refer to athletes being 18 years of age, a milestone Suaalii will reach days after the closing ceremony next year.

In reality, though, the Australian sevens team has sought and been granted special dispensation for a handful of 17-year-old athletes to be allowed to compete in open age groups, including Sariah Paki, Tiana Penitani and others.

These precedents make Australian officials confident Suaalii would be cleared to compete – with significant caveats around his Year 12 school commitments at Kings.

Hewat said the game must use everything in its arsenal to pitch a winning program-over-dollars proposal.

“I hope rugby plays on its strengths,” he said. “At their age their careers could span Olympics, a tour against the [British and Irish] Lions and the next three World Cups. Without putting pressure on them, that would be a pretty big carrot for me as a young player.”

Previous ‘Happy to own up’: Lodge concedes Broncos were sucked in by hype
Next Titans stun Tigers to claim first win in almost a year