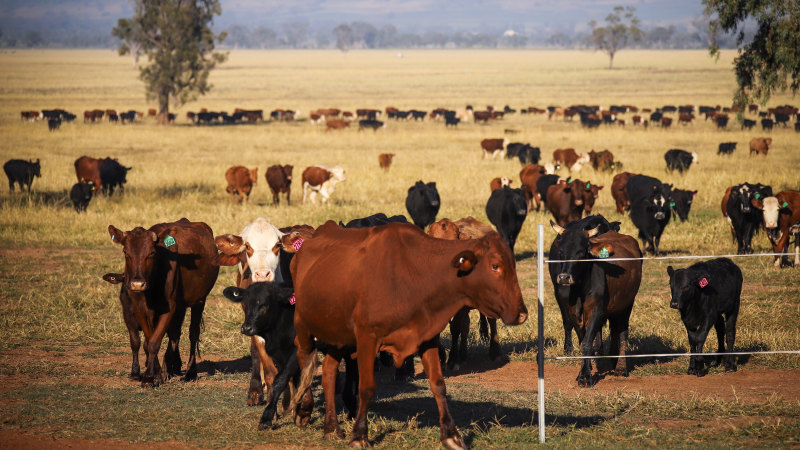 However, some scientists promote a new accounting methodology known as GWP Star, which counts the global warming potential of greenhouse gases over 20 years.

Methane emissions break down in the atmosphere over 12 years, much quicker than carbon dioxide, which takes 100 years to break down.

Tony Hegarty from the Cattle Council said GWP Star could provide a “more accurate approximation of the actual warming” caused by methane over its lifetime.

“We are prepared to allow the scientists to do the analysis. It’s better for us to call on the government and international community to have a serious conversation. I’m very confident it’s a more accurate approach and it could make a significant difference to our [cattle industry] emissions,” Mr Hegarty said.

The GWP Star method says the greenhouse effect of methane should not be calculated in the same way as carbon dioxide. Under this methodology, when an industry increases above the baseline of emissions starting in 1997, that is counted as growth.

But significantly, a decrease below the 1997 baseline is counted as emission reduction. In this way, when industry emissions fall below the baseline set 23 years ago, it can claim not to be contributing to additional global warming.

Melbourne University agriculture Professor Richard Eckard, who endorses using GWP Star, said the Australian national herd has declined by 12 per cent over 20 years and under GWP Star this would be recognised as net greenhouse gas reduction.

“This calculation shows that livestock in Australia have potentially contributed to a cooling rather than warming, relative to the period prior to 1997,” Professor Eckard said.

However, other scientists say the rate of breakdown doesn’t change the impact of a gas on warming if it’s continually topped up by grazing cows, even while emissions break down.

“There’s a difference in the lifespan of the gases but because there are constant emissions the build-up in the atmosphere is the same,” Professor Howden said.

“GWP Star is trying to compensate for the different lifespan of greenhouse gases, but in doing so it actually grandfathers previous emissions levels (before 1997), which brings all sorts of problems into the system.”

Professor Howden said under GWP Star when an industry reduced its methane emissions by 12 per cent, it may claim to contribute to global cooling and “get a green light”, whereas under the existing GWP100 approach it would still get a red light – just slightly less red.

“These are pretty fundamental differences,” he said.