Returning holidaymakers at a standstill across Sydney highways 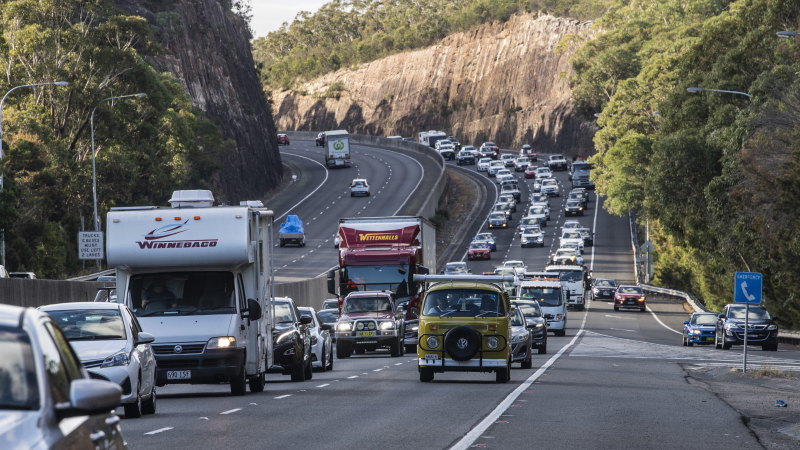 Northbound traffic on the Hume and Pacific Highways was also backed up, with people experiencing delays of up to 40 minutes from Nowra, and 35 minutes from Douglas Park to Mittagong.

A Transport for NSW spokesperson said that traffic levels were consistent with holiday period expectations.

“There have been no major traffic incidents on the M1 or any other major state highways today,” they said.

Earlier, five people were taken to hospital after a motor vehicle crash in Sydney’s inner west on Monday afternoon.

Three fire crews were called to Parramatta Road near Dalhousie Street at Haberfield after a crash involving two vehicles at 2.30pm.

“When we arrived, there we some people trapped who had to be rescued by firefighters,” a Fire and Rescue NSW spokesman said.

Five occupants from the two cars were taken to hospital. The road was cleared after 30 minutes.

In other long weekend road incidents, a man has been charged after a fatal crash in the Blue Mountains on Saturday afternoon, following reports of a collision involving a bicycle and a utility.

The 64-year-old male cyclist was taken to Westmead Hospital in a critical condition. He later died.

Also on Sunday night, an unaccompanied learner driver was charged with high-range drink driving and speeding.

A Ford Falcon was detected travelling 150km/h in a sign-posted 100km/h zone, on the Princes Highway near Pointer Road, Yatte Yattah.

Officers subjected the 35-year-old Marulan man to a breath test, and also noted he was driving alone with a learner’s license. He was arrested and taken to Ulladulla Police Station, where a breath analysis allegedly returned a reading of 0.156.

In Liverpool, a Mitsubishi Lancer travelling on the Hume Highway allegedly lost control and narrowly avoided a pedestrian, before hitting a metal street sign and crashing into a service station.

The 40-year-old driver was arrested and taken to Liverpool Police Station, where he allegedly returned a breath analysis reading of 0.185.

He was charged with high range drink driving, dangerous driving, and negligent driving.

Traffic and Highway Patrol Commander, Assistant Commissioner Michael Corboy, said that the two motorists were lucky not to harm anyone.

“This type of behaviour is unacceptable, and it is sheer luck that no one was injured as a result of their poor judgement and lack of respect for the road rules,” he said.

“Always have a plan B if you are drinking, know the speed limit and respect yourself and other drivers. We want everyone to return home safely over the Queen’s Birthday long weekend”.