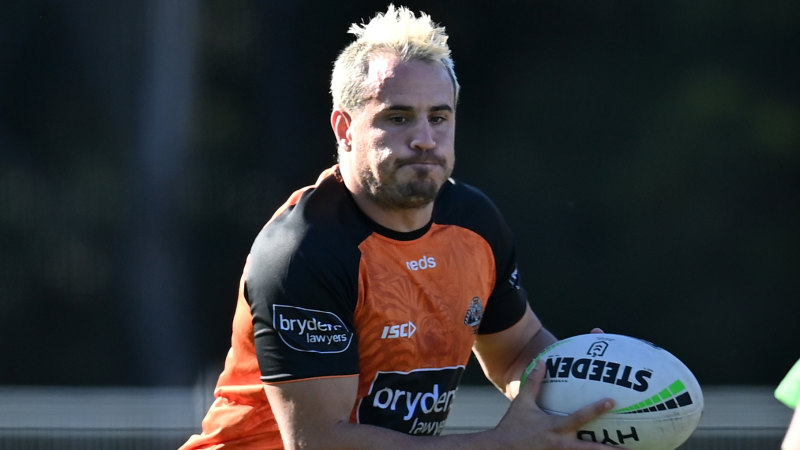 The Herald can reveal Reynolds was in good spirits on the flight home from Brisbane despite the shock loss. There was no alcohol consumed on the flight, which had to be diverted to Sydney because of poor weather.

The players caught a bus back to Bankstown where their cars were parked before going their separate ways just before 1am.

The Tigers told the NRL Integrity Unit about the matter. Reynolds has not been stood down from training or playing.

It has been a trying few months for Reynolds, whose domestic violence charges involving former partner Arabella Del Busso were quickly dropped. A third request to get back to his beloved Bulldogs also failed to eventuate.

On Twitter on Monday, Reynolds said: “I arrived back from QLD with the team via plane, late last night. I was driving home to get some food and was pulled up with an expired drivers’ licence, which I was unaware of an oversight by me.

“The officer conducted alcohol and drug testing. The alcohol test was negative. The roadside drug test was a false positive. I went to the police station and undertook the further sample for the higher level testing, which proved negative.

“I am told false positives on roadside tests are not uncommon. I was then released without charge.”

The NRL said the integrity unit were working with the Tigers and NSW Police to determine the full details.

Reynolds will be pushing hard to play against Canberra on Saturday night after being named on an extended interchange the past two rounds. He still has another 18 months remaining on his lucrative deal and impressed officials and teammates with his on-field enthusiasm at training.

Previous Betts and McKay back for the Blues
Next ‘Very risky’: Government warned return of childcare fees could trigger exodus of families