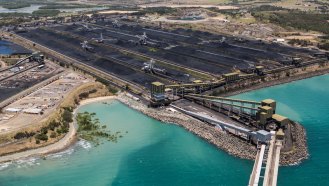 The crew will be tested and Queensland Health is working with authorities to ensure safe port operations and the safety and wellbeing of staff, crew and the community.

Authorities said biosecurity officers routinely carried out inspections of ships as they dock in Australia, but the captain’s reaction raised a “red flag”.

“It was his reaction which prompted the officers to raise concerns,” a health spokesman said.

“We are not sure if it was an issue with translation but it appeared the captain was reluctant to allow inspectors access to parts of the ship.”

A doctor and a team of health officials have now tested everyone on board and are awaiting results.

The precaution comes weeks after a livestock carrier became stranded off the West Australian coast with crew infected with COVID-19.

The Al Kuwait docked in Fremantle on May 22 with 48 multinational crew on board. A total of 20 eventually tested positive for the virus.

No new cases were reported in Queensland overnight, with the statewide tally remaining at 1062.

There are just three active cases across the state.