How football has changed since the coronavirus shutdown 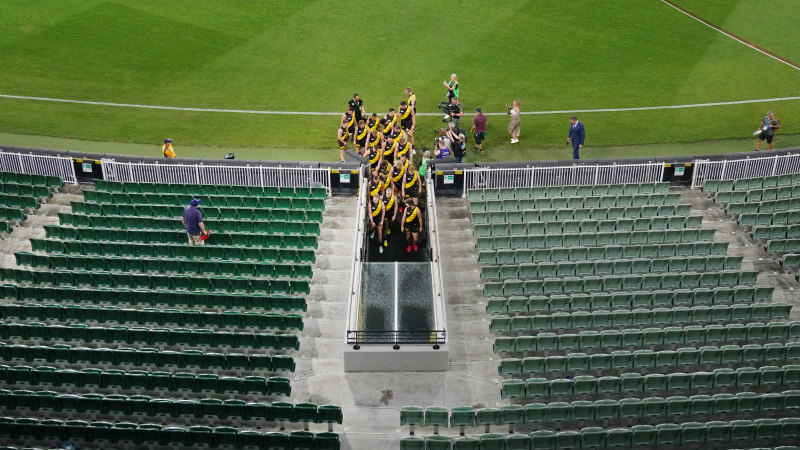 The league is operating with just 30 per cent of its staff employed, all nominally on reduced hours and wages but working twice as hard as normal to get the game back after the shutdown due to the coronavirus pandemic that eroded all revenues.

Clubs operating close to the previous soft cap of $9.7 million a year used to spend about $180,000 a week to support the team on the park. Now, forced to slash staff to meet the budget, they have left with a skeleton crew including selected coaching staff and the football manager, trainers, doctors, a psychologist, masseurs, physiotherapists, a wellbeing manager and trainers. Three media people are also embedded in football departments.

Players are playing for half their normal wages and will review the CBA going forward. Last year the average player’s wage was $401,552 whereas that figure would be reduced to about $284,000 a year based on 50 per cent cuts since March.

Umpires are earning half as much as usual, too, with the best umpires capable of earning $150,000 a season in the pre-COVID-19 era.

Some players, such as the Giants’ Jeremy Cameron and Carlton’s Jack Martin, have taken huge pay cuts as their contracts had been front-ended, written in such a way that 2020 was the year when most of their income would lob in their bank account.

The luck has fallen the other way for other star players, with 2020 set to be a low-earning year of a big contract.

On Thursday night however all that will be forgotten for the time being, as Richmond and Collingwood go into battle in an empty stadium. They will be following protocols that will make regulate their movements everywhere except on the playing arena.

Players will drive solo or with a teammate or football department official to the ground, encouraged to take their gear in a bag or suitcase so they won’t have to use the lockers in the deep-cleaned changerooms that will still have security positioned at the entrance to keep unauthorised people out, which includes presidents and board members.

Medical screening will occur, with temperature readings needing to be below 37.5 degrees, and players will shower before and after the game with soap as well as handing over their phones that have been wiped down with sanitiser.

Massage tables will needed to be covered each time a player lies down, while towels can’t be shared. Even the bowl of lollies is gone, with communal food options banned inside the rooms.

Footballs will be wiped down with anti-bacterial wipes before the game and at the start of each quarter.

If the ball is kicked over the fence, players and umpires are not allowed to jump into the seats to retrieve it, with clubs having to provide ball stewards. Don’t roost the ball into the second tier if you get a Joe the goose in the goal square; it won’t go down well.

People will keep 1.5 metres apart on the bench and no headsets can be shared, while iPads must be wiped down regularly.

Security and police will be at the grounds, with the MCG producing a 32-page document of protocols, and Collingwood will have cardboard cutouts of supporters behind the goals while Richmond will have a message at the Punt Road end.

If players want any motivation beyond teammates and the economics of the game then look no further than supporters – fewer than three per cent have requested refunds on their memberships, despite not being able to attend matches.

There will be a maximum of 25 media representatives in the press box and four people allowed in each radio box.

AFL CEO Gillon McLachlan will be in a corporate box to watch the season resume while Channel Seven’s Brian Taylor will be at the ground commentating “alongside” Bruce McAvaney, who will call a game from the Adelaide studio.

To get into the ground, each of those people will need to pass through a fever clinic before entry, filling out a questionnaire and having their temperature taken.

The ball will be bounced, the match will be played and the song can be sung after the match with people keeping their distance, before the players meet most media commitments by phone unless it’s with the official broadcaster. The post-match press conference with the coaches will occur as normal.

The journey has begun and who knows where it will end in 2020, with McLachlan’s words from May 15 underpinning every step: “I am confident that how we start won’t necessarily be how we finish and that as the situation changes around the country we have the flexibility, agility and industry collaboration to change where we need to.”

Previous Charges laid over chemical stockpile that led to West Footscray blaze
Next Swans, Giants will wear cost to get fans back to games