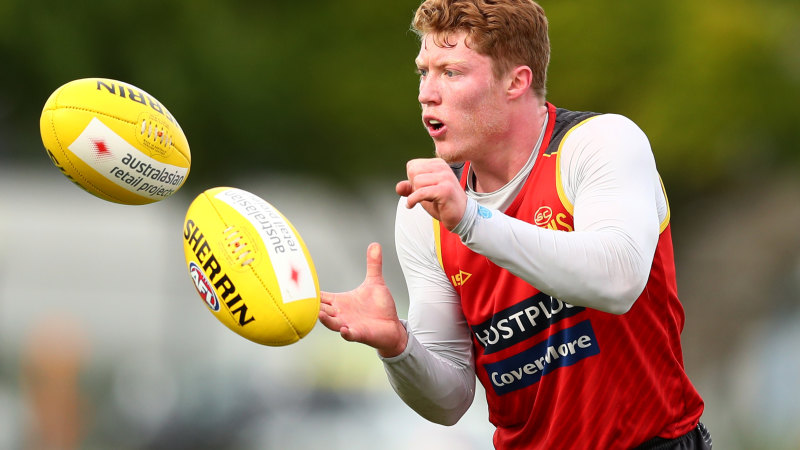 Rowell and Anderson both made their AFL debuts in the Suns’ round one loss to Port Adelaide.

The anticipated re-signing of Rowell is a significant further step in the rebuilding of the club around elite young talent, and stopping the hemorrhaging of that talent.

The Suns put the argument to the AFL commission last year when they applied for a compensation draft pick that unique circumstance of two elite players being best friends made the logic of an extra draft pick for the club additionally relevant last year.

One of the Suns’ biggest problems has been the retention of elite talent. The new regime has so far managed to sign the best of the young guns they have wanted to keep – albeit Jack Martin left at the end of last year when out of contract.

Critically, the Suns last year re-signed key forward Ben King; there had been fears he would leave the Suns to attempt to reunite with his twin brother Max and play at St Kilda.

They also last year locked in early draft picks Jack Lukosius, Izak Rankine, Ben Ainsworth and Jack Bowes to contract extensions, creating the nucleus of elite talent that the team is now being built around, along with experienced dual premiership player Brandon Ellis.

The signings mark a turnaround from the club, which had lost Jaeger O’Meara, Dion Prestia, Tom Lynch, Steven May and Gary Ablett since 2016.

If and when Anderson also recommits, the Suns will have secured their best players for a minimum of four years each at the club, buying sufficient time to start to see results on the field.

Previous Former celebrity financial adviser charged with dishonest conduct
Next ‘This is one of the great ones’: Search for teen ends in celebration