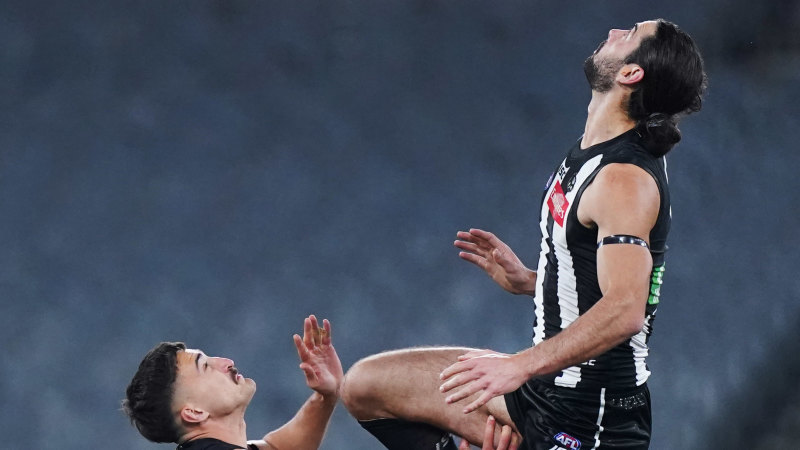 “Draws are a hollow feeling at the best of times, but a draw in front of no crowd is an interesting feeling.

“It did get dewier as the night went on. Ball handling was an issue for both sides.

Asked what he learned from the game, the Pies coach said: “You feel a little bit dumber after watching a game like that.”

As if this AFL season – this whole year – wasn’t already eerie enough, at the MCG on Thursday night Collingwood and Richmond restarted the AFL season not with empty gestures in a full stadium, but a loaded gesture to an empty stadium.

Minutes before the first siren, all players mingled around the centre circle, then each took to one knee to show solidarity with the Black Lives Matter movement.

More from Greg Baum, who was at the MCG.

Collingwood skipper Scott Pendlebury expressed some sympathy for long-suffering fans that the first game back after the break ended in a draw.
“I feel sorry for everyone at home that’s waited three and a half months and they get a draw first up, so no doubt there’d be a few broken TVs,” he told Fox Footy.
“But it’s just great to be back, to walk away with a draw is frustrating but we take two points and move on to next week.”

Jon Pierik kept a close eye on proceedings from the couch.

As Fox Sports’ head of television Steve Crawley had reinforced this week, outside of the players, crowds were the most important part of a sporting broadcast.

To the delight of the AFL world on Thursday night, the players finally returned to official action from their COVID-19 hiatus, with the league having scheduled a blockbuster between traditional rivals Collingwood and Richmond at the MCG. Typically, there would have been more than 80,000 fans at the venue but pandemic restrictions meant supporters were locked out. So, was it still really going to be a blockbuster without any crowds?

There was a fair bit of dew tonight, but scores had already declined year on year for a long time, and with matches now 20 per cent shorter, we should get used to these sorts of games.

Scott Pendlebury was excellent for the Pies, finishing with 31 disposals, while Steele Sidebottom had 27.

Tom Lynch kicked three goals for the Tigers, Tom Phillips slotted two for the Pies but both squandered chances too.

Nick Vlastuin lays a tackle on Callum Brown to avoid Brown getting a kick away in the dying seconds 40m out, and the points are shared!

The first time these two sides have played out a draw since round six, 1917!

Bolton weaves through traffic who kicks long to the pocket but Castagna can’t control it and it rolls through for a point.