Call to topple monuments is an opportunity for debate

admin June 11, 2020 National News Comments Off on Call to topple monuments is an opportunity for debate 27 Views 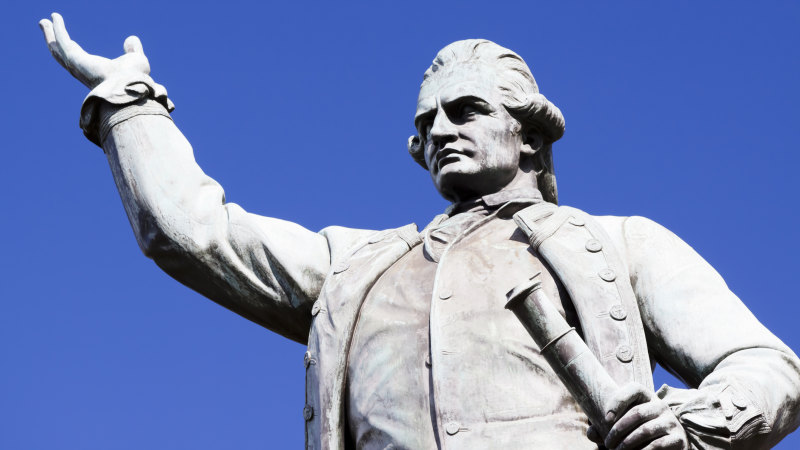 The Prime Minister invites us to see Cook still as a hero, cast in the same image as that statue over a century ago. But history should be wary of heroes. What our country needs now is a courage of our own, a willingness to grabble with and move beyond our deeply troubled past.

Australia now stands at a juncture. For over a century statues to Cook, Macquarie and others have reduced complex and often contradictory historical actors to simplistic, one-dimensional caricatures. Heroic statuary bled the past of its complexity and rendered it lifeless in stone. By occupying civic space, tributes to white heroes (and there are many) serve to legitimise narratives of conquest and colonisation, they sanitise the violence and dispossession that marked the forcible occupation of Aboriginal lands.

What might be the way forward? Indigenous Australians have shown us the way.

Calls to topple such monuments vent the anger of generations: they forcefully repudiate the wrongs of the past and remind the Prime Minister that the values – and heroes – of past generations need not be our own.

What might be the way forward? Indigenous Australians have shown us the way. The Constitutional Convention at Uluru called for a process of “truth telling and reconciliation”. Colonial monuments that have long stood unchallenged in the hearts of our communities might well be a focus for that dialogue and debate. This will remove those Great White Men from the pedestal they have long occupied – figuratively, if not literally. They were placed there as statements of power and privilege, but in a democratic and inclusive society, they should be (as the precedent set by the London City Council suggests) subject to review and critique.

And there are other precedents we might look to. The Explorer’s Monument in Fremantle was raised in the first decade of the Commonwealth, several years after Cook’s statue was planted in Sydney parkland. Built to commemorate three white men killed by Aboriginal people, it enshrined another pioneer myth writ deep in Australian history.

A series of plaques circling the monument claimed that these explorers were attacked at night and “killed in their sleep” by “treacherous natives”. The land where they died is portrayed as empty: a “terra incognita”. Aboriginal people are described as savages, the whites as “intrepid pioneers”. An equally imposing bust pays tribute to Maitland Brown, “leader of the government search and punitive expedition” who carried the explorers’ remains back with him to Fremantle. Brown’s expedition ended in the massacre of around 20 Aboriginal people; mounted and well-armed, none of his party were killed or wounded.

In 1994, the United Nation’s Year of Indigenous Peoples, elders from Bidyadanga set a new plaque at the monument’s base. It outlined the history of provocation that led to the explorers’ deaths, acknowledged the right of Indigenous people to defend their traditional lands and solemnly commemorated “all those Aboriginal people who died during the invasion of their country”.

It was a striking instance of what scholars call “dialogical memorialisation”, where one view of the past takes issue with another and history is seen not as some final statement, but a contingent and contested narrative. The dedication service ended as Aboriginal people scattered dust from the site of the massacre and two white children laid wreaths of flowers decked in Aboriginal colours.

What happened in Fremantle is one act of truth telling and reconciliation. It suggests the way that monuments that once narrowed and distorted our view of the past can open hearts and minds.

Professor Bruce Scates is based in the School of History at the Australian National University.

Previous Lockdown turns to deadlock as Pies, Tigers draw
Next We need to avoid our own ‘obsession with university’