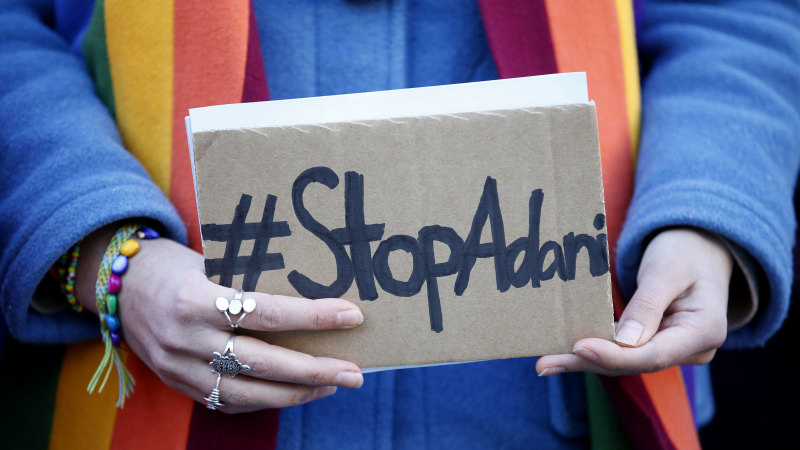 Pablo Brait, a campaigner for shareholder activist group Market Forces, said the company’s silence spoke volumes, and renewed calls for greater transparency. “Aspen Re needs to come clean on what their involvement on this project is and then make a commitment to not get further involved.”

“Companies need to be transparent about the level of climate risk they are taking on and shareholders need to be informed of that risk,” Mr Brait said. “The risk is not just financial, it’s reputational because being linked to a highly controversial project like the Carmichael mine will harm the company’s reputation and translate to financial risks down the track.”

Queensland Premier Annastacia Palaszczuk refused to comment on why local insurers and banks had ruled out financing the mine. “They [Adani] have to work out their finances. We have been very clear about that all along, that is the same for any company in Queensland,” she said.

Aspen Re was bought by global alternative asset manager Apollo in February last year for $US2.6 billion ($3.7 billion). The company’s website spruiks its responsible investment practices and pledges to “drive change” by putting environmental, social and governance factors “the core of what we do”.

It is unclear if either of the companies have committed to limiting exposure to fossil fuels, but a white paper written by Aspen Re in April last year acknowledges the severity of the risk posed by climate change.

“It is beyond reproach that the Earth’s climate is changing in ways that will undoubtedly present negative impacts that will be bourne on some level by every person and business,” the white paper said. “Many of the scientific models present catastrophic damage scenarios occurring relatively soon – within the lifespan of our children.

“The monetary cost of climate change – be it for adaptive actions or failure to adapt, will be enormous, eclipsing the GDP of many developed countries for decades to come. Injury and damage to persons, property, businesses, governments, ecosystems and natural resources, to name but a few, are unfortunately unavoidable at some level.”

Carbon emissions from burning fossil fuels is the world’s primary cause of climate change. Adani has approval to produce up to 60 million tonnes of thermal coal each year. Most of the coal will be exported and therefore the emissions do not impact Australia’s commitment to reduce emissions by 26 per cent on 2005 levels by 2030.

Aspen Re’s white paper recognises demand for thermal coal in India may dry up as the government seeks low-carbon economic growth. Adani’s financial accounts show it made a $279 million loss for the year ending March 31 and construction on the project has been slow. Aspen Re did not respond to questions about the long-term viability of the Adani project.

A spokeswoman for Adani said there was no doubt about the viability of the project due to strong demand for thermal coal from countries in south and south-east Asia.

“We have secured the market for the 10 million tonnes of thermal coal per annum that will be produced at our Carmichael Mine in Central Queensland that is now being constructed,” she said.

The world’s largest insurance broker Marsh has been tight-lipped on which insurers are backing the mine, and an Adani spokeswoman insisted the project was fully covered but details were confidential. The Marsh source said Aspen Re was likely to play a larger role, but the strategy of dividing risk between many insurers on short-term, rolling contracts would continue.

“If something’s dirty and risky it’s logical they would divide the risk among many to minimise exposure for any sole provider,” he said.

The big four Australian banks and insurers Allianz, Suncorp and QBE have ruled out financing the project and have made commitments to reduce their exposure to thermal coal projects.

Corporate Australia’s move away from thermal coal reflects a global trend where insurers are leading the pack. A 2018 report by NGO Arabella Advisors found the global insurance sector is responsible for $3 trillion of the $6.2 trillion divested from the fossil fuel industry.