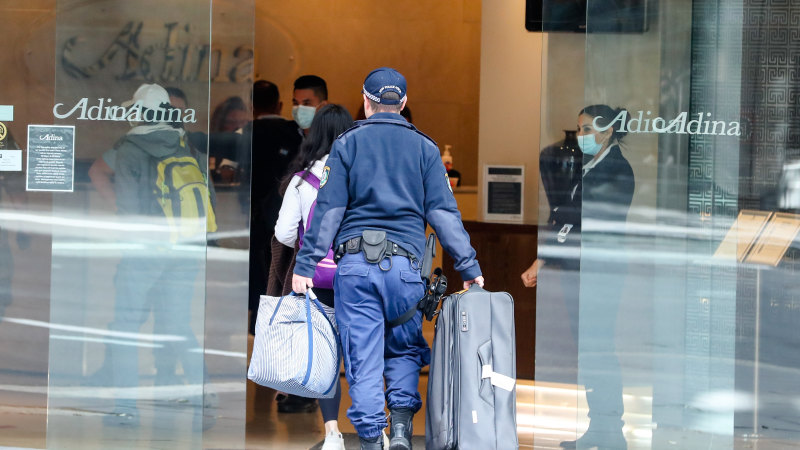 The prospect of forcing returning travellers to pick up the quarantine bill has been raised informally at meetings of national cabinet and the states are now awaiting advice from the Australian Health Protection Principal Committee.

The NSW government has spent more than $16 million since March 28 on quarantine accommodation to house international travellers returning to Australia.

Victoria is expecting to eventually receive an estimated 15,000 returned travellers, budgeting $2000 a person, or $30 million, for the hotel stays.

NSW – which has carried the burden of more than 60 per cent of arrivals – intends to pass on an invoice to other states, but Victoria says it will cover all of its quarantines.

More than 20,700 people have now been quarantined in NSW hotels as of June 3.

All states and territories agreed at national cabinet in March, at the height of the coronavirus pandemic in Australia, to cover the cost of accommodation for individuals who needed to be quarantined.

The Northern Territory later opted to force those arriving, including domestic arrivals, to pay for their own accommodation and food, which amounted to about $2500 per room.

Queensland Premier Annastacia Palaszczuk said last week her government was “looking in the future” for returning overseas travellers to pay that bill.

Chief Medical Officer Brendan Murphy said two weeks ago Australia could have avoided cases of community transmission of the coronavirus if it had moved earlier to require overseas travellers to undergo hotel quarantine.

Health Department data shows more than 62 per cent of all COVID-19 cases in Australia are considered to be acquired overseas, totalling more than 4400 infections.

A spokesman for NSW Treasurer Dominic Perrottet said the NSW government’s decision to quarantine travellers returning to Australia “was instrumental in helping NSW flatten the curve”.

“This has paved the way for the NSW economy to start re-opening, which will keep more businesses in business and people in jobs,” the spokesman said.

He said he was getting “frustrated” with states not lowering their borders and they should all act on the three-step timetable agreed by national cabinet weeks ago to complete the removal of restrictions in July.

The Prime Minister, premiers and chief ministers will on Friday also consider when to relax rules around indoor gatherings.

Mr Morrison said on Thursday the Black Lives Matter protests which took place in capital cities around Australia over the weekend could stop them from reducing restrictions earlier.

He said protesters who continued to take to the streets should be charged by police.

“It puts others’ lives and livelihoods at risk,” he said.

“Millions of quiet Australians have done the right thing, and they (the protesters) didn’t seem that concerned about their health or their businesses or their jobs.

“People who show up to a protest this weekend would be showing great disrespect to their neighbours.”

Previous Fans not there but TV coverage lifts ‘spirits’ on AFL return
Next Manly of steel: Gritty Sea Eagles dig deep to run down Broncos