Breaking News
Home / AFL / Footy takes the knee, and takes to the streets

Footy takes the knee, and takes to the streets

admin June 12, 2020 AFL Comments Off on Footy takes the knee, and takes to the streets 24 Views 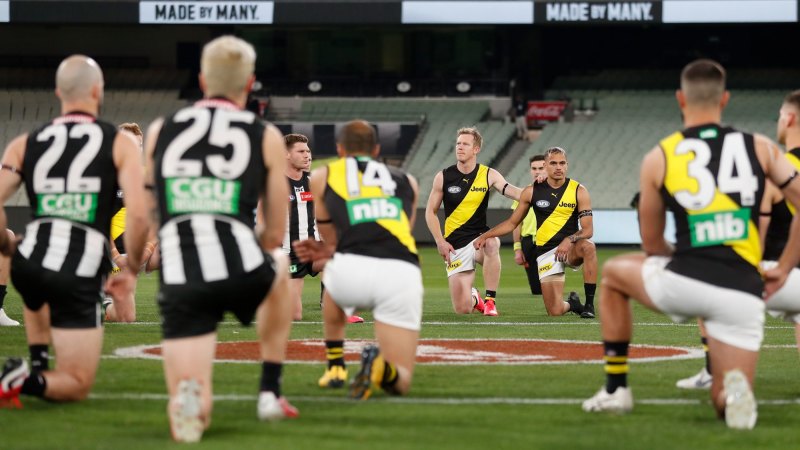 As recently as January this year, the IOC reinforced a ban on statements at the Olympics. It’s your politics, but it’s our sport, you see.

In the space of mere weeks, everything changed. It began with a couple of soccer players in Germany. Now sportspeople and teams everywhere are mounting displays of solidarity with Black Lives Matter. On Thursday night, it was Richmond and Collingwood.

Even the IOC backed off this week, a little. It will “explore” room for Olympic athletes to have their say. Luckily, they’ve got an extra year for exploration.

Why now, and so many, and so fast? Most likely, it’s timing. The pandemic has given even the most apathetic athlete think time and greater global awareness. Social media is the accelerant. As the momentum gathers, it is sweeping up even those who have doubts and daring administrators to crack down. Instead, they are enlisting. It has aspects of revolution.

Yes, movements come and go, but this feels lasting. For one, it’s generational. The modern player is more connected and more aware and perhaps more idealistic than his predecessors.

You only had to listen to Richmond’s Dave Astbury talk on Thursday night to know it. Still in his guernsey, still recovering from a draining match, he said: “It’s not going to be a one-week movement for us.” It could have sounded platitudinous, but did not.

The other is unanimity. This is not sportsmen of colour protesting and whites nodding their agreement. “The best part about it,” said Astbury, “is that a lot of the strongest voices in our club were non-Indigenous. I echo the thoughts of Gregg Popovich that that’s where the change is going to come from.”

Previously, well-meaning people in footy when addressing race sought to celebrate difference. The Richmond players in their statement on Thursday night used “diversity” instead. It’s a better word, hopefully for a future better time.

Of course, sport is far from perfect. At this very moment, Heritier Lumumba and his unfinished business at Collingwood came awkwardly to the fore again.

Of course, sportspeople can’t solve racism. But they have the power and platform to highlight it, and they are, and this time, administrators are not trying to gag them. Sport v politics? Sport is politics.