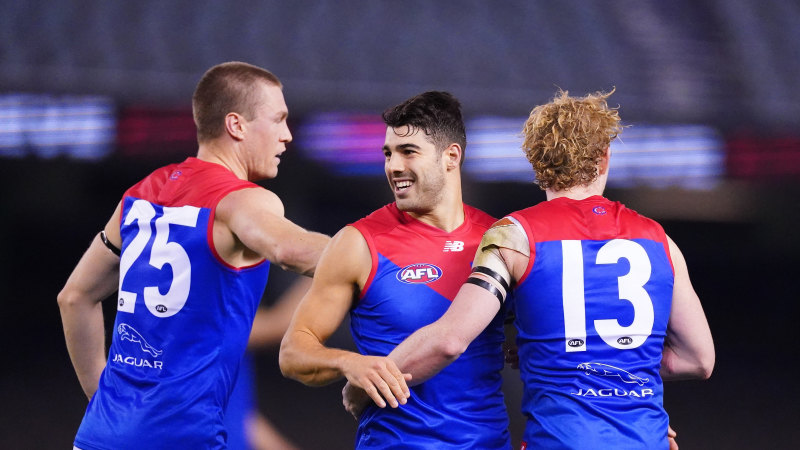 “We probably played a bit nervous in the last quarter but I thought our last two minutes was terrific,” he said.

“Our willingness to want to win, I thought some critical contests, especially through the middle of the ground from some of our players, was outstanding and I thought we actually showed a lot composure late in the game.”

The Demons had seven goals on the board, their dominance in the ruck, at the contest and in open space so pronounced that it appeared the Blues would be goalless come the main break at Marvel Stadium. That ignominy was only avoided when, with one minute and 36 seconds left in the second term, David Cuningham capitalised on a dropped mark by Steven May and converted from 40m. Carlton, as former Blue Dale Thomas noted, had resembled “witches hats” to that point, the Demons doing as they pleased.

That the Blues were able to show some fight and add the next three goals crossing half-time was a tribute to their resolve and better use of the ball. They also benefited from having a loose man in defence. But just as they threatened in the third term, Petracca delivered the highlight when he marked strongly at half-forward, landed like a cat and immediately played on, converting from 45m. In the commentary box, former Demon Bernie Vince said Petracca was in the “mould” of Dustin Martin. “He is on fire,” he said on Triple M.

The Blues needed former Hawk Marc Pittonet, having replaced the injured Matthew Kreuzer, to be a physical presence but he was unable to be a major factor.

The pain of defeat for the Blues was compounded by a serious leg injury to Nic Newman, with initial diagnosis being he had hurt his patella tendon. Newman was hurt when he was pushed under the ball in a marking contest by Fritsch in the first term and his leg buckled. He was stretchered off the field and his season could be over.

The Blues had hoped a tall forward line of Harry McKay, Levi Casboult and Mitch McGovern would be an aerial threat but a lack of clean supply – and connection through the midfield – hurt.

Harley Bennell had been moved to tears upon learning of his selection but it was all smiles after his first AFL game since August 2017 because of repeated calf issues. Bennell began on the bench but was back to where he wanted to be five minutes into the contest. The former Sun and Docker was soon in the thick of the action, and had a slick handball to a teammate in traffic. Readjusting to AFL tempo was never going to be easy, and there were no long, dashing runs that Bennell had been known for. He began the third term on the bench and will only be better for this run.

Some players have the ability to look right at home and that was the case with Demons debutant Trent Rivers, whose composure at half-back impressed Vince. Rivers played his junior footy at the Eastern Fremantle Sharks – the same club as Demons top draftee, Luke Jackson. The latter, complete with a headband, also stepped out for the first time, and he, too, showed plenty of promise as a forward.

It wasn’t quite the “welcome home” party Eddie Betts had planned. Having missed round one through injury, Betts had hoped his second coming as a Blue would start impressively. He booted one goal and looked a touch rusty.

Previous ‘Best half this season’: Storm blow away Knights with early blitz
Next Returning rugby fans in NZ treated to thriller at packed stadium