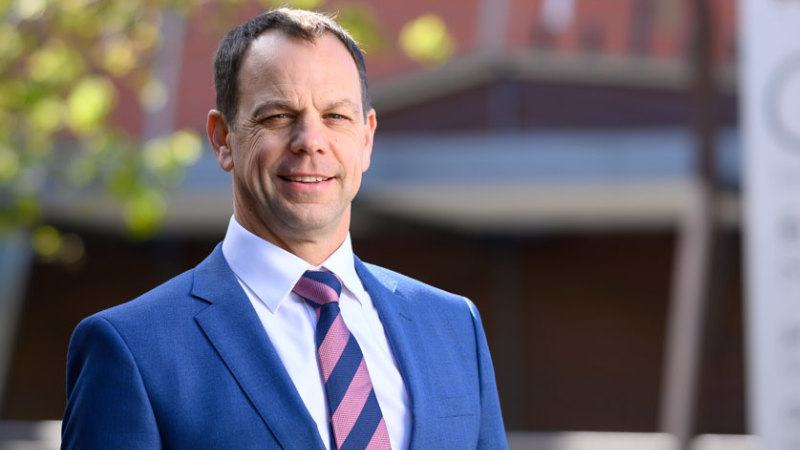 “Everyone went off for the (Labour Day) long weekend and then I was contacting the whole community to say we’ve actually had a case and we made the difficult call to not come in on Tuesday.”

“Then we quickly pivoted into remote learning which was a massive shift for everyone and there was no opportunity to brief the students or staff in person because by then it was all online.”

School closures following a confirmed case of coronavirus are based on the advice of the Victorian Chief Health Officer and the Health Department. If a school is directed to close, the Education Department then helps communicate with staff and families.

“The Health Department, they were fantastic stepping with us through it; it was the first (school) case for them as well and we were developing an approach on the fly with them,” Mr Walter said.

‘I had no idea we’d be dealing with this, but you see the best in people when a crisis hits.’

Kensington Primary School principal Bridget McLaughlin felt the weight of her responsibility when she received the news in mid-March that two parents had tested positive.

“We needed to make sure we got it right and all the information we sent out was clear and accurate.

“There were some very, very high levels of anxiety. We needed to get those clear facts.”

While the school was temporarily closed for deep cleaning, Ms McLaughlin said her staff got a jump on planning for remote learning.

“The whole school really rallied to make it work,” she said.

“I don’t want to go through all that again, but now we know we can go through it all.”

Both principals say an unexpected silver lining of the crisis was seeing the school communities band together and come through it more unified.

“You can never anticipate things like this,” Mr Walter said. “I had no idea we’d be dealing with this, but you see the best in people when a crisis hits.

“We’re feeling really very optimistic about the way forward from here because we’ve learned so much.

“There’s a new level of connectivity between us all.”

Anna is a breaking and general news reporter at The Age.

Previous Masks may be better defence than hand washing: US study
Next Real estate agent lodges claim for more than $743,000 in alleged unpaid commissions