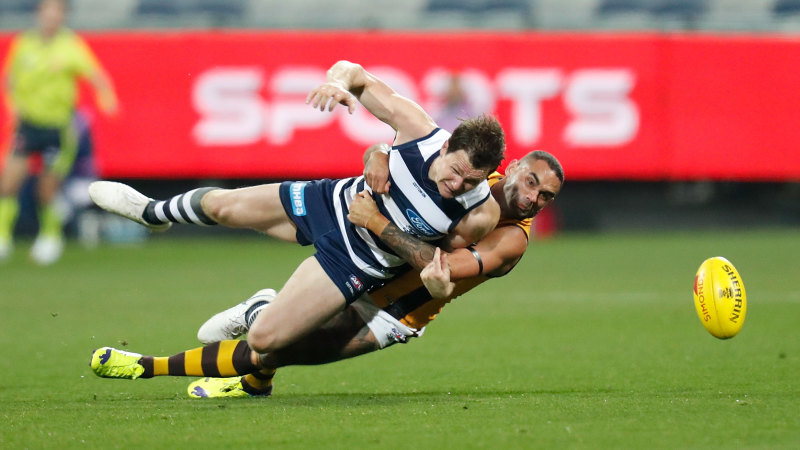 He said whether a player is concussed or gets straight up again is not the measure of impact to be considered.

“It is the action, we are pulling it right back to the action here [not the outcome],” Hocking said.

Burgoyne, 37, was fined $1000, which will be reduced to $500 under league rules in place for 2020, for careless conduct, low impact and high contact, after slinging Dangerfield to the ground during Hawthorn’s loss to the Cats.

The AFL wants to send a clear message to players across all levels of football that any dangerous tackle will be met with a heavy penalty.

A head injury provision exists in the tribunal guidelines but is rarely invoked. Hocking said it does not cover the specifics of a sling tackle. He said the provision could only be used with a spear tackle, or when a player’s arms are pinned.

All clubs were informed of the altered rules via a memo on Monday night, which stated upgraded penalties will apply for any dangerous, high contact tackles.

Hocking admitted that the tribunal was also notified that the AFL’s intent is for the potential to cause serious injury to be accepted as a serious consideration in levying penalties on players for acts.

He reinforced that the potential harm rather than the actual harm – whether a player is consussed or gets up and walks away – is less consequential in deciding the severity of a blow and the punishment it draws.

“Dangerous tackles have the potential to cause serious head injuries and it’s important this is taken into account when assessing an incident under the AFL tribunal guidelines,” Hocking said.

“One of the things that was a frustration for us was that [the existing rules] didn’t capture all dangerous tackles. The potential to cause serious injury was only captured under spear tackles and pinned arms.

“Clearly over the weekend that was not the case. Dangerfield did get an arm free and moving forward we can capture all things with this strengthening.”

Dangerfield, who received a free kick and was able to play out the game, sympathised with his rival, Burgoyne, at the time.

“It’s pretty hard from Shaun’s perspective to be able to see where the ball is in play,” Dangerfield said.

“We expect so much of our players to play on instinct and play on edge and be physical.”

Previous No Hunter, no gatherer: What’s wrong with the Western Bulldogs?
Next Love Machine nightclub fined $10,000 for COVID-19 breach