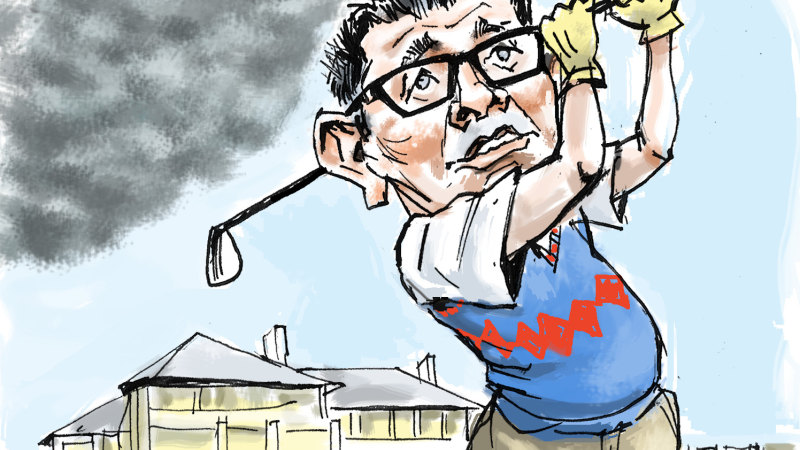 According to Royal Melbourne members, a Sunday slot on one of the club’s two championship courses is one of the city’s more coveted invitations. In December, Royal Melbourne hosted the President’s Cup, attracting greats including Adam Scott, Tiger Woods and Ernie Els.

Eagle-eyed members observed the Premier didn’t join the club’s usual Sunday competition, opting for a light-hearted round with mates instead. Presumably he saves his A-game for Cheltenham’s Kingston Heath Golf Club, where he is a member.

It’s worth noting the Parliament of Victoria isn’t the only bastion of power headed for a major showdown this week. Royal Melbourne Golf Club’s annual general meeting is scheduled for this Saturday, to take place virtually – via Zoom or something like it – from 5:30pm.

It’s no secret 2020 has been a trying year for golfers as the result of Victoria’s Chief Health officer, the hyper-vigilant Brett Sutton, imposing a statewide playing ban. Hackers and pros alike were not happy. None more so than at Royal Melbourne, where some members have told CBD they believe captain Andrew Kirby and the club’s committee could have done more to plead the sport’s case with authorities, and at the very least, cut membership fees during the lockdown.

The members list includes Education Minister Dan Tehan, infrastructure expert Sir Rod Eddington, and former Qantas chairman Leigh Clifford. In other words, there will be plenty of loud voices and opinions at the virtual meeting on Saturday.

It’s been a month since colourful Victorian barrister Denis Connell had his access pass to his Owen Dixon Chambers disabled, following complaints from neighbours.

Readers are likely to recall how the veteran barrister – and one time host of the radio show Lawyers, Guns and Money – had his tenancy inside the Queen Street chambers put on ice, pending an investigation into allegations he had called a female barrister a “c—” and told another to “f— off”.

Connell admitted he had used vulgar language to a colleague who started “carrying on like a hysterical banshee” after he had asked for help doing up the Velcro fastening on his jabot, the white collar that barristers wear to court.

But he rejected other allegations of drinking and sleeping in the office, and described a letter outlining a case against him from the property managers Barristers Chambers Limited as “bizarre”.

Either way, he appears to have had a win. His access card has been reinstated and he is able to use his office again.

“I’ve been let back into chambers and the key has been enabled – as of Friday,” he told CBD. “It was just an awkward situation where there was a complaint that was made and [the property managers] felt they had to follow it.”

As for the alleged complainants, Connell reckons they were driven by self-interest of the oldest variety – office envy.

“There were two parties that wanted my chambers and they were giving people stories. I was compelled to respond to the allegations that were being made, because they were just plain wrong,” he said.

BCL’s chief executive Paul Clark did not respond to requests for comment.

BACK ON THE TEAM

There’s a new face stalking Australian Parliament and the corridors outside Labor leader Anthony Albanese’s office. The Leader of the Opposition has taken on veteran political advisor Alex Cramb as a senior press secretary.

Albo announced the appointment last week of the Labor veteran, who served as communications director to former NSW Premier Nathan Rees, and an adviser to Labor’s former home affairs minister Bob Debus. For more than a decade, Cramb has worked as a lobbyist at Government Relations Australia, and then the merged GRA Cosway.

Cramb once made a notable appearance in front of the NSW corruption watchdog in 2013, memorably comparing Labor minister Ian Macdonald’s decision to green-light a “training mine” to whalers claiming their activities were “scientific research”.

At the time, the NSW Independent Commission Against Corruption was investigating the circumstances of Macdonald’s announcement to award the mine a licence, which was made on Christmas Eve, 2008. Even then, Cramb didn’t mince his words – agreeing that the move had ”some of the hallmarks of taking out the garbage”.

Previous Victorian ALP urged to root out corruption, examine culture
Next Sydney residents to pay less for water until next drought hits