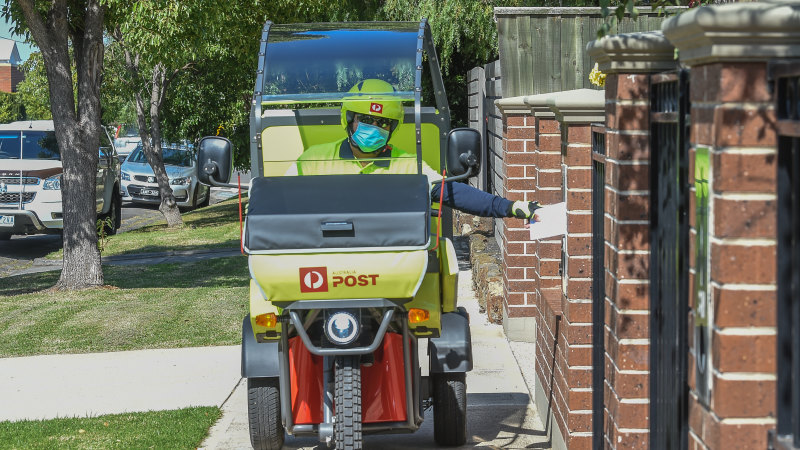 Labor communications spokeswoman Michelle Rowland said the new figures showed the first numbers disseminated were misleading and actual declines appeared to be “beating or in line with the internally budgeted pre-COVID forecasts”.

She labelled the initial figures a “hoax” and said they were used to justify changes that put posties’ jobs in limbo.

“The Morrison government has tried to use a health pandemic to bypass consultation and ram through an agenda that cuts services and cut jobs,” Ms Rowland said.

As the Senate considers the fate of the regulatory changes, Australia Post chief executive Christine Holgate took the unusual step of writing to senators, criticising “false claims”, insisting the regulatory relief was temporary and would not result in forced redundancies or wage cuts.

In a statement on monday, Mr Fletcher said: “Labor’s baseless scare campaign about Australia Post is Mediscare all over again.”

He said letter volumes were way down and parcel volumes way up, with COVID-19 accelerating those trends and necessitating changes allowing the postal service to repurpose 2000 posties.

“That means more job security for posties – as they are redeployed to the growth part of the business – and better services for Australians, who are buying lots more online, which in turn means many more parcels to be delivered,” he said.

Shane Murphy, national president of the Communication Workers Union, accused Australia Post of peddling “false figures” using the coronavirus to cut 2000 posties’ jobs out of a workforce of 8000.

A confidential 2018 internal Australia Post report obtained by the Sydney Morning Herald and The Age included a plan to slow down mail deliveries to make savings estimated at more than $200 million a year, but did not recommend the plan because of a potential “clear reduction in customer service” and “reputational risk”.

Other options, including “remove delivery frequency” from the standards the postal service is required to achieve, were recommended, but it is not clear whether they were adopted and Australia Post has previously described the report as “comprehensively outdated”.

One Nation, whose votes are critical to blocking the government’s change, met with a delegation from Australia Post on Monday and will hold at least one more meeting with the union before coming to a final decision.

A senior source close to the party, who was not authorised to speak, said it was leaning toward supporting the government because it was not convinced there would be redundancies on the scale the union claimed.

Centre Alliance Senator Rex Patrick said he was still awaiting briefings before making up his mind.

Previous ‘A lot of changeover’: Gallen says instability at top affecting Sharks on pitch
Next Arsenal readies to ‘surprise’ City in competition restart