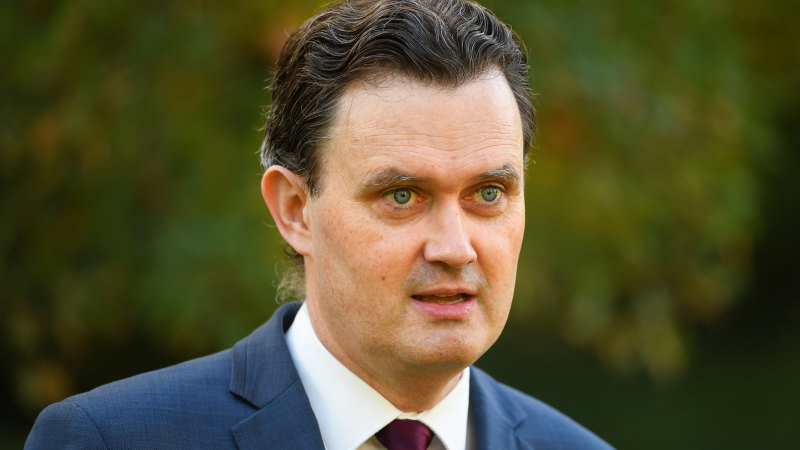 Mr Andrews said that he had sought assurances from Mr Scott, a factional ally of Mr Somyurek, that his behaviour did not warrant him stepping down while investigations took their course.

Mr Andrews batted away repeated questions at a lengthy press conference about whether Mr Scott and Marlene Kairouz, the Minister for Consumer Affairs and another ally of Mr Somyurek, should remain in cabinet while investigations by the police and Independent Broad-based Anti-corruption Commission (IBAC) were ongoing.

“I’ve seen the program, I’m aware of those claims and comments. I’ve sought assurances from both those individuals that they’ve acted appropriately at all times. They’ve given me those assurances. This is now a matter, appropriately I think, for Victoria Police and IBAC, and we will await the findings that they come down with and we will respond accordingly,” Mr Andrews said.

But in a statement released on Monday afternoon, Mr Scott said he would resign his position in cabinet for the good of the government and his family. Mr Scott was serving as Assistant Treasurer and Minister for Veterans.

“The Australian Labor Party has played an enormous part in my life, and champions values that I hold particularly dear. Because of this, I found the recent reporting of matters relating to the administration of the party especially confronting,” he said in his statement.

“To the extent that these matters relate to my conduct, I look forward to the opportunity to clear my name. I am very confident that the investigative process will do so.

“However, I am conscious of the burden that this process will take on myself and my young family. I am also
concerned at the distraction my involvement in the process may cause for the government.

“I have therefore notified the Premier that I will stand aside from my ministerial responsibilities, and I have
notified the Governor of the resignation of my commission, effective immediately.”

Mr Scott said he would continue to serve his Preston electorate and remained “grateful to have the privilege of doing so”.

The Age and 60 Minutes investigation revealed claims by Mr Somyurek that Mr Scott agreed to allow an electorate officer, Nathan Croft, to branch stack while employed in Mr Scott’s office.

“He’ll be doing work from there, Robin won’t mind,” Somyurek says on the recording. Another tape captures Croft claiming Scott approved the arrangement.

“I spoke to Robin and he said on his days [when I work at his office] he’s pretty chill,” Croft says. “I gave him the heads-up that I was doing some of this stuff and he’s like, ‘Have fun.’ “

Mr Scott had also told The Age that he and his office have no involvement in branch stacking prior to the publication of the investigation.

Mr Scott is a senior member of the Andrews government having served on the frontbench for almost a decade both in opposition and in government.

He was previously Minister for Finance for four years up until the 2018 election.