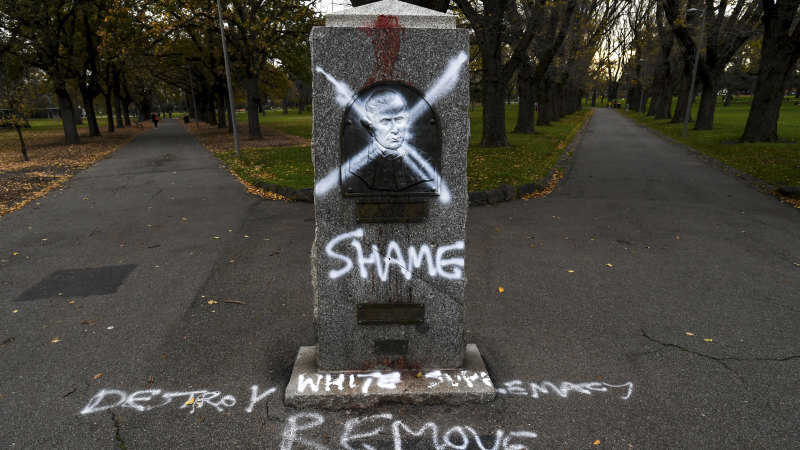 She said most people she had spoken with weren’t worried about painting “Black Lives Matter” on the street, but stopping Aboriginal deaths in custody.

“This is early consultation and we need to ask the community more broadly. There will be different views, there are different views in the Aboriginal and Torres Strait Islander community about statues for example.”

Cr Jolly will put forward an amendment to specifically consult with the community on the Edinburgh Gardens statue. He acknowledged it was a symbolic gesture, and that Yarra Council needed to work on bigger issues like housing for Aboriginal people.

“We’re not going to just make a decision on behalf of Indigenous people,” he said.

Cr Jolly suggested the plaque could be moved to a local museum or historical society because “Captain Cook was a significant person in Australian history”.

“But to celebrate [him] is an entirely different thing.”

Mayor Misha Coleman said she has received a lot of feedback from the community as the Black Lives Matter movement gains momentum.

“What I’m trying to do is be as respectful and considered as possible, and not do anything knee-jerk that’s going to cause anyone more damage,” Cr Coleman said.

“My view is, we actually need to understand the broadest range of Wurundjeri views as possible to avoid harm, but to also ensure we take action that matters and are not just symbolic gestures. Symbolic gestures have a place, but we also have an action plan with 57 actions which need to be funded.

“I’m keen to look at ways to make a difference to people’s lives. To do that you need to talk to a diverse range of people.”

Premier Daniel Andrews has spoken against the defacing of colonist statues, saying the focus should be on “direct action”.

“My focus is not so much on symbols. My focus, when it comes to Indigenous affairs, Aboriginal justice and a shared pathway forward, is action,” he said on Monday.

The motion from Cr Stone asks council to acknowledge the lack of progress following the Royal Commission into Black Deaths in Custody in 1991, incarceration rates, grief in the community, and the relationship with police.

It also asks council to commit to ongoing consultation with the Wurundjeri Woi Wurrung, Aboriginal and Torres Strait Islander community in Yarra, including “investigating public art and civic signage opportunities to maintain mainstream momentum and community engagement with the Black Lives Matter Movements”.

The motion comes after the Captain Cook plaque, at the Rowe Street entrance to Edinburgh Gardens in Fitzroy North, was defaced on Sunday. On the monument’s stone and on bitumen in front of it are the words “DESTROY WHITE SUPREMACY” and ”REMOVE THIS”.