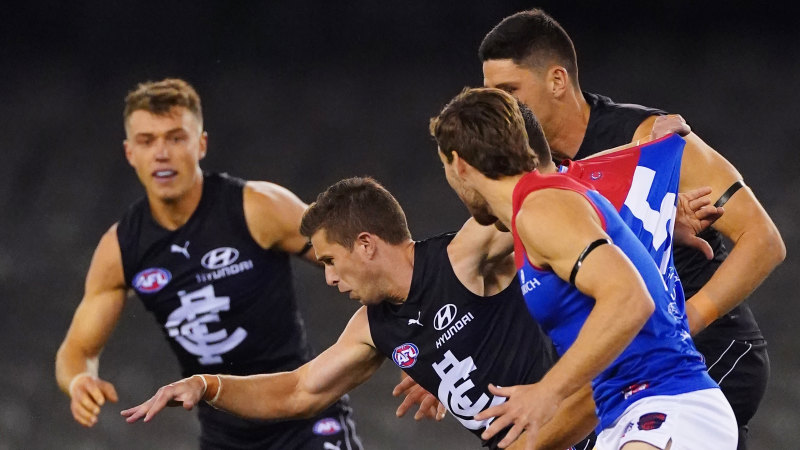 The poor starts in 2019 were evident in narrow losses to the Bulldogs and Melbourne and in a their last-gasp victory over Fremantle, but circumstances and explanations for what lead to falling behind in those games were not uniform.

The poor opening to the Melbourne game last year was attributed to a simple lack of intensity in the first half.

Overall, Carlton ranks 18th for tackling differential in the competition this year, laying 19 fewer tackles than their opponents. The Blues laid only seven tackles in the first quarter against the Demons last Saturday, and nine in the opening term against Richmond.

Carlton were also beaten in contested ball in the first quarter against the Demons, but they turned this around by half-time, having won the contests by seven in the second term.

Their tackling lifted dramatically against the Demons in the second quarter (20 laid). In the Richmond game, the tackle count was down throughout the match, as they laid only another 14 for the match.

The numbers of the two games say that the Blues are winning their share of the ball (they are third for forward entries), but have issues with efficiency – they are 18th for disposal efficiency differential (- eight per cent) and are 17th for converting forward entries (-19 per cent) compared with their opposition – as well as tackling.

Richmond lead the league in tackling differential (plus 35), while Collingwood, surprisingly, is equal 16th in tackles against their opponents (-17).

Carlton, who expect to regain Jack Silvagni from illness for this weekend’s challenging match at Geelong, were pleased with the efforts of new ruckman and recruit Marc Pittonet, even though he was beaten by Max Gawn, and of those of defender Jacob Weitering, rookie Michael Gibbons and their premier recruit, former Sun Jack Martin.