Bolton says Trump not fit for office, lacks the ‘competence’ to be President

admin 3 weeks ago World News Comments Off on Bolton says Trump not fit for office, lacks the ‘competence’ to be President 17 Views 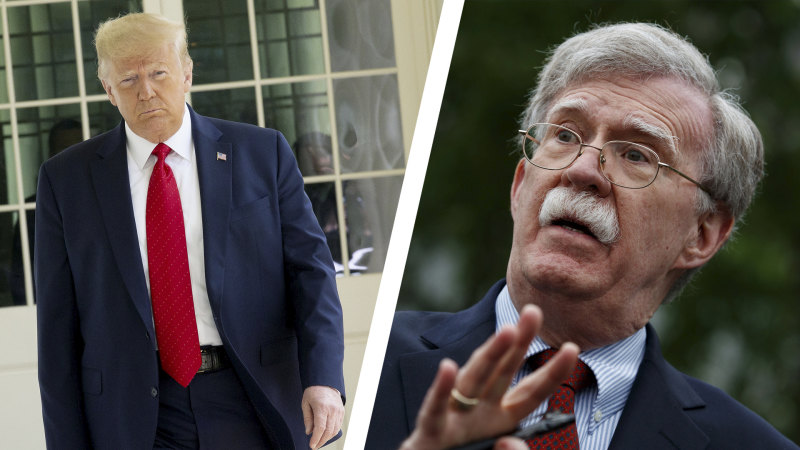 Trump on Wednesday accused Bolton of breaking the law by trying to publish the book, which the President said contains classified information. The Justice Department sought an emergency restraining order to block its publication.

“He broke the law, very simple. As much as it’s going to be broken,” Trump told Fox News host Sean Hannity in an interview on Wednesday night. “This is highly classified.”

In a separate interview on Wednesday with the Wall Street Journal, Trump defended his handling of China and other nations while dismissing several of Bolton’s allegations as coming from a “crazy” person and a “liar.”

Bolton writes that Trump gave Xi his blessing during last year’s Group of 20 summit to build detention camps to house Uighur Muslims, an example of how the former national security adviser said the President valued a trade deal at the expense of human rights and the US’s national interest.

“That’s not true,” Trump said of Bolton’s description of his conversation with Xi.

Trump pointed out he signed legislation on Wednesday that could lead to sanctions against China over the camps. The signing was announced soon after excerpts of Bolton’s book were published by news outlets on Wednesday.

“I could have killed that very easily,” Trump told the Journal.

But the President did not deny Bolton’s claim that he wanted to lift penalties on major Chinese companies in order to curry favour with Xi during talks over the phase one trade agreement.

Bolton writes that he and other advisers persuaded Trump to reimpose a ban on Huawei from doing business with US companies, after Trump offered to reverse criminal prosecutions against the company.

“Nobody has ever been so tough on a company as I have to Huawei,” Trump said.

Trump also said ZTE Corp. was hit with a $US1.3 billion penalty as well as changes to its board, even though he pulled back on harsher punishments over allegations it violated US sanctions on Iran and North Korea.

“ZTE was my deal,” Trump said. “It was an unbelievable deal.”

But Bolton said Trump’s desire to place his personal interests ahead of the country’s extended to his dealings with other world leaders, including North Korea’s Kim Jong-un.

A longtime North Korea hawk, Bolton hammered Trump over his decision to meet Kim last June in the Korean demilitarised zone before Pyongyang had taken significant steps to dismantle its nuclear program.

“So if he thought he could get a photo opportunity with Kim Jong Un in the demilitarised zone in Korea, there was considerable emphasis on the photo opportunity and the press reaction to it and little or no focus on what such meetings did for the bargaining position of the United States,” Bolton told ABC.

Previous Minister met with alcohol lobby before pregnancy warning label sent back for review
Next As it happened: Hawks upset Tigers at the MCG