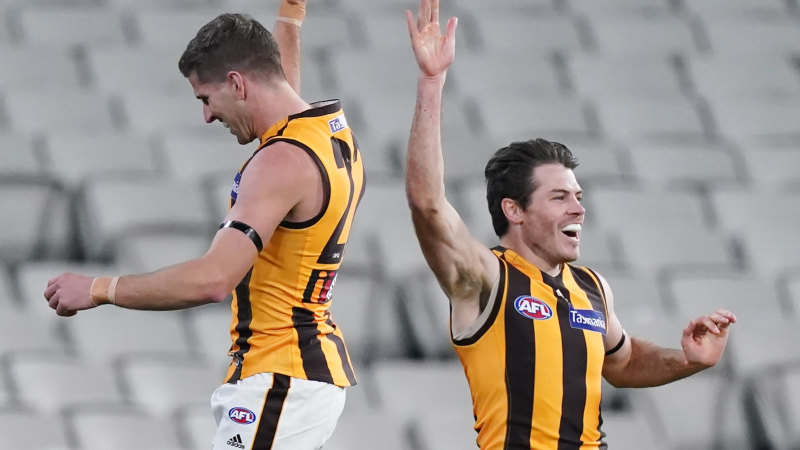 Hawthorn also had Isaac Smith. The wingman played a superb first half in particular, streaming down a wing and amassing a remarkable and damaging 21 touches in just that first – shortened – half and kicked a delightful left foot raking goal. He was the architect of the win.

Hawthorn’s third or fourth rate midfield last week – Alastair Clarkson’s words not ours – was first rate this week and made Richmond’s look, what? Second rate? Third?

Hawthorn had Jaeger O’Meara back in and he had an impact in lifting the class around the ball. Tom Mitchell, off long-term injury, was flat last week but dogged around the ball this week. Blake Hardwick was an under appreciated absence last week for his toughness.

Ben McEvoy, a question all week over his shift to defence and the preference of John Ceglar, had four intercept marks in defence to half-time, and looked good while Ceglar won the ruck.

The Hawks used the width of the ground and their skills to do as Collingwood did early last week and deny Richmond possession of the ball – they had double the uncontested possessions of Richmond in the first term alone.

McEvoy went straight to defence again and manned Tom Lynch. The Hawks tended to play a zone to roll off opponents, so McEvoy often stayed deep as the tall defender and let others take Lynch when he pressed up the ground.

Josh Caddy booted the ball long and high to the top of the goal square. Tim O’Brien had the right idea to jump and punch not only out of the pack but through for a rushed behind.

Shane Edwards anticipated that someone might try that and put himself on the goal line. Duly the ball was punched straight to him and he turned and snapped the Tigers’ second goal.

On the MCG this year the Hawks have now beaten Brisbane – a top four team last year – and the reigning premier. Maybe the Geelong game was a little about the shape of Kardinia Park.

First the big ruckman cannoned into his teammate Jack Higgins and forced him to spoil a certain mark near goal early in the second half.

Then, minutes later, he swung an arm trying to spoil Ricky Henderson marking a ball and clipped him in the head, knocking him to ground. He gave away a 50m penalty and maybe a bit more. The tribunal guidelines, amended earlier this week, do talk specifically of the potential to cause serious injury from “forceful round arm swings that make head-high contact to a player in a marking contest”.

But then the case for defence was the clumsy Higgins collision moments earlier by the big man.

Previous As it happened: Hawks upset Tigers at the MCG
Next Safe injecting trials should not be confined to the inner city