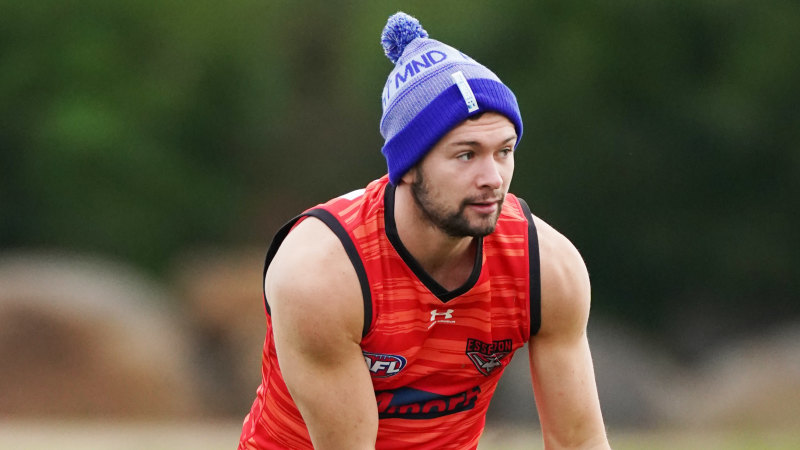 The ramifications, clearly, are enormous for the club and more so for the competition; if the AFL had dreaded the prospect of a player contracting coronavirus, it had long thought this was more likely to happen than not.

In a season defined by uncertainty, the McKenna positive has created an astonishing scenario whereby the AFL, Essendon and Carlton don’t know if they’re playing next weekend, and might not know until Tuesday or even Wednesday.

They are in the hands of the Victorian government’s department of Health and Human Services, which will have to decide how long players who’ve been in the vicinity, or had physical contact with McKenna, must wait before they can be cleared to play, assuming negative tests to the virus.

If it’s decided that it’s a five-day wait, they’re a chance to play the Blues. But this must surely be in doubt, given the risks that an individual could test positive at a later time.

The abrupt increase in COVID-19 cases and consequent tightening of rules by Premier Daniel Andrews suggest that the AFL and Essendon would be fortunate to resume so soon.

The setback reverses the momentum that the game had gathered, due to continued progress against the virus. Fans had become accustomed to the notion that footy was gradually returning to normal; the league was hopeful of crowds returning in Victoria relatively soon, while protocols for players had been eased a little and if they have not quite cut loose, some players clearly haven’t been monks either.

If this was an unwelcome turn of events, the game and Essendon are fortunate that McKenna’s asymptomatic positive was detected on the eve of the game.

Had he and the club played, there was potential for multiple infections and footy’s first outbreak.

The question of how McKenna contracted the virus will be probed, via contact tracing, and there will be an anxious wait to see if any others within the club have been infected.

On Saturday, no information was yet forthcoming from the AFL, the club or his management, on how he had been infected, bar the club view that it had likely happened between Wednesday and Friday.

The positive test underscores that footy must accommodate and fit in with community needs, rather than the reverse.

The shortened quarters, which many had thought unnecessary given the progress and normalisation, were devised for precisely this kind of setback. A compression of games could well be on the cards.

This was the AFL’s first moment of genuine misfortune since the shutdown. But we should not be surprised something’s gone awry. Footy can’t count for long on the luck of the Irish.