Solo mission a ‘badge of honour’ for Grundy: Buckley

admin 3 weeks ago Sport Comments Off on Solo mission a ‘badge of honour’ for Grundy: Buckley 31 Views 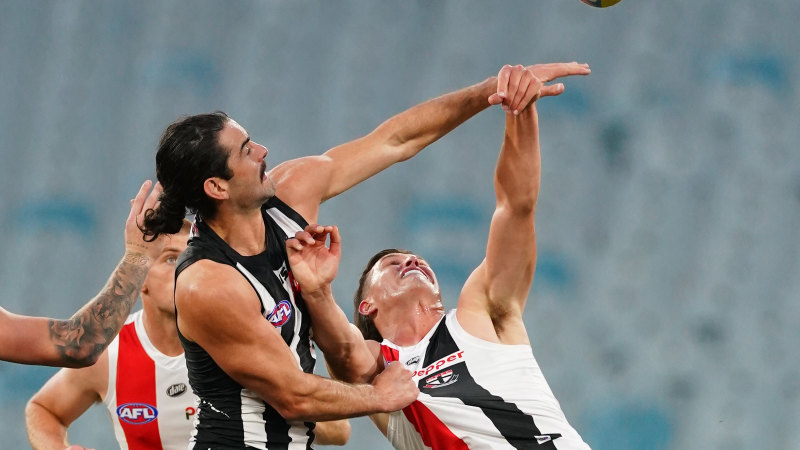 “Paddy Ryder, especially at centre bounces, he probably jumps as well as anyone. Nic Naitanui is right up there but Paddy would be the next, I reckon,” Buckley said.

“Brodes had a few knees in throats early in the first quarter. It’s as combative as any [role] on the field as we know. You need to roll your sleeves up every week and be prepared to go to war with the guys that you are facing.

“The fact that he had two blokes rotating through him, and he had some help from Darcy Cameron … I think Brodes wears that as a real badge of honour that he can carry the can for that for us. The longer the game goes, he sees it as a battle of attrition and he just plays that way. It’s been a hallmark of his footy and it really sets up the rest of his teammates as well.

“He still has a lot of footy in front of him and that’s why we signed him to such a long deal.”

Saints coach Brett Ratten, who had seen this match as a test of where his side was in the pecking order, praised Grundy’s performance but lamented Ryder and Marshall were unable to go forward and impact in front of goal.

“I thought Paddy had his moments against Grundy … but I will have to give the points to Grundy. He took on two and he is very good ruckman,” he said.

Jade Gresham battled hard in the contest for the Saints but Dan Hannebery was quiet on an evening Ratten said his side over-finessed the ball, was “exposed” by the Magpies’ pressure and didn’t challenge their opponents “at any stage”.

“We over-finessed the ball early and just turned it over and gave it back to them and they got some momentum,” Ratten said.

“Over the four quarters, they were tougher and harder in the contest than us. Their ability to be clean around the contest was pretty evident.”

The Magpies’ back line, led by Jeremy Howe and Jordan Roughead, ensured the Saints did not have a tall who could take charge. Max King had a dirty evening on Roughead, although the Saints had their opportunities in the third term.

The Pies were also able to squeeze their opponents who can dominate when in space, as they had showed against the Western Bulldogs a week earlier.

Buckley maintains the Pies have a squad mentality and they could welcome back Adam Treloar for Friday night’s trip to Sydney to face the Giants after he successfully returned from a calf injury in a scratch match against the Saints on Saturday. Forward Mason Cox, having had a knee issue, was another to emerge unscathed.

“If he [Treloar] is fit, he will be in contention. We have a few other boys that are putting their hands up as well,” Buckley said.

Buckley said the Magpies had been aware pre-game that Essendon speedster Conor McKenna had tested positive to COVID-19 but the Magpies now would be guided by the AFL.

“It was probably almost inevitable that someone in an AFL club was going to test positive at some stage – now we go into the process,” he said.