From the Archives, 1994: ‘Courteous crooks’ grab $2m in Armaguard hijacking 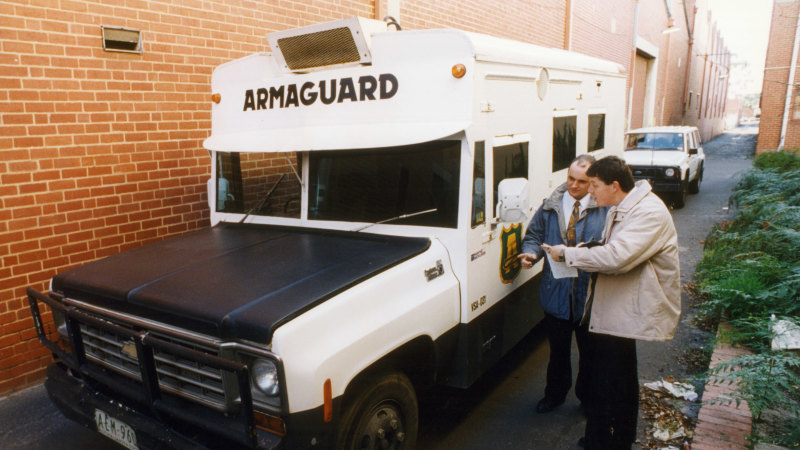 Police said that when the van was stopped in traffic two other members of the gang jumped into the back and handcuffed three guards. The robbers then drove off with the van.

Detective Sergeant Ross McKenzie, of the armed robbery squad, said the robber was particularly daring. “They (the thieves) were very confident,” he said. “They knew what they were doing. It was a very well-planned robbery and very well-executed.”

No one was injured and Detective Sergeant McKenzie described the robbers as “courteous and very confident”. At least one of them was armed with what was believed to be a revolver, but no shots were fired.

The robbery rates with some of the state’s most notorious thefts, including when five armed bandits stole jewellery and antiques worth $4.5 million from a Yarra Glen home on 24 October 1985, and the great bookie robbery on 21 April 1976, when at least $1.4 million was stolen from the Victorian Club in Queen Street; estimates of the actual taking range up to $12 million.

The three Armaguard guards were last night undergoing trauma counselling after spending most of the day with detectives from the armed robbery squad. Police said they had been handcuffed and hooded during the robbery.

Detective Sergeant McKenzie said the Armaguard truck had picked up its cargo at the Reserve Bank in Collins Street and was going to a branch office of Mayne Nickless at Carrum Downs when the robbery took place. The truck was not damaged by the robbers.

Mr Ian Greenshields, a spokesman for Mayne Nickless, said few people could have known the van’s route. “That (how the robbers knew) is one of the answers we would like,” he said. “The other is how they got in the back door.

“We don’t have regular routes, we have alternative routes. It is up to the driver to choose whatever route (the van goes in).”

Mr. Greenshields said the guards’ guns were not taken during the robbery. The three, two of whom were in the front of the van and one in the back when it was stopped, were regarded as senior employees of the company and they had been working there for several years.

Detective Sergeant McKenzie said that after the truck was hijacked it was driven to Walnut Street. The bandits transferred the money to what was believed to be a white Mazda delivery van, which drove north.

The dazed guards later freed themselves from the security truck and a passerby phoned the police. A local man used bolt-cutters to cut the handcuffs.

He said the bogus workers wore blue overalls, and one wore a white workman’s helmet.