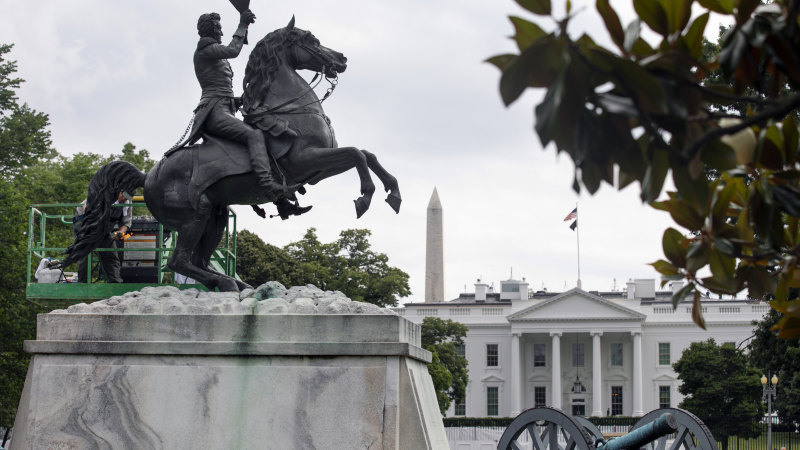 Jackson, the seventh US president, was a former army general and a populist politician nicknamed “Old Hickory”, whose political style has sometimes been compared with that of President Donald Trump.

Native American activists have long criticised Jackson, a Democrat, for signing during his 1829-37 presidency the Indian Removal Act, in which thousands of people were driven from their land by the government. Forced to march West in what was described as the “Trail of Tears”, thousands of Native Americans died before reaching their intended destination.

Trump immediately weighed in claiming in a tweet that “numerous people” had been arrested for “the disgraceful vandalism”. He added: “10 years in prison under the Veteran’s Memorial Preservation Act. Beware!”

Interior Secretary David Bernhardt was at the scene and issued a statement saying: “Let me be clear: we will not bow to anarchists. Law and order will prevail, and justice will be served.”

On June 1, law enforcement officers forcefully cleared peaceful protesters from Lafayette Square so Trump could stage a photo op at a nearby church.

Earlier on Monday, protesters clashed with police in the nearby streets, the latest in a string of demonstrations against police brutality and racism following the death of a 46-year-old Black man, George Floyd, under the knee of a Minneapolis police officer. Police moved in to remove tents erected on a street near the White House.

During the operation, Newsham said some demonstrators resisted, and two officers were assaulted. He said police arrested two people, and used pepper spray to move back the crowd.

“We can’t have people setting up tents on public streets,” he said.