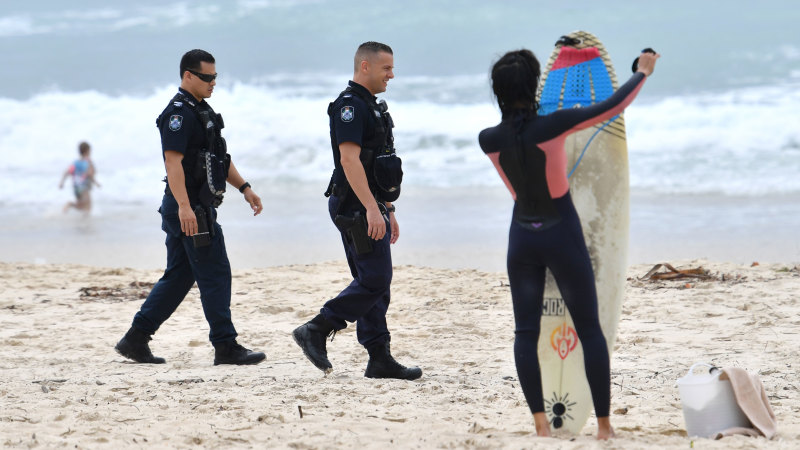 These include a 28-day period for the alleged offender to pay or respond.

If no action has been taken after eight weeks, the amount is sent to the State Penalty Enforcement Registry for debt recovery. No further action had been taken on a total of 897 fines as of June 10.

The data shows just 168 fines had been paid as of that date.

A total of 285 people had entered into voluntary instalment plans with SPER and 540 fines were referred to the body after payment was not received. Details of a further 60 had been passed to the agency but were yet to be accepted.

In 64 cases, police had commenced prosecution against the alleged offender.

No data beyond the number of fines issued at a regional level in Queensland has been released, despite it existing in other states. Weekly updates on the enforcement measures have also ceased.

Queensland Human Rights Commissioner Scott McDougall has requested further demographic details for the fines, along with information about the review process for each.

“The commission has been concerned about the potential for vulnerable members of the community to incur significant fines for which many of whom would have no reasonable prospect of ever being able to pay,” he said earlier this month.

Police confirmed at the time they could access “broad demographic” data but would not confirm whether this would be provided.

In New South Wales and Victoria, such information has revealed little correlation between enforcement efforts and the spread of the virus, while raising questions about the targeting of more vulnerable groups such as Indigenous Australians, migrants and those living in social housing.

Bridget Burton, the director of human rights and civil law practice at Caxton Legal Centre, had warned most vulnerable people were likely to “ignore” the $1334 fines and the 28-day review period, leading to them being chased by SPER.

The Queensland Council for Civil Liberties has also called for de-identified fine data to be released to ensure police are “transparent” in how they are exercising discretion.

Queensland sits behind only Victoria in terms of the number of fines issued.