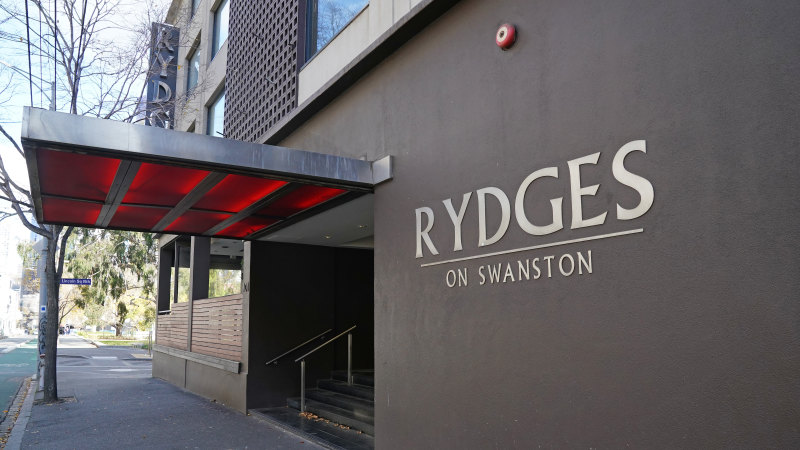 At least 33 contractors employed at the hotels have been infected while working, and coronavirus infections have spread outside hotels to the family members of staff, contributing to the state’s spike in community transmissions.

A plan to divert repatriation flights from high-risk countries away from Melbourne Airport was abandoned on Tuesday night, amid federal health authorities’ concerns about infection control breaches in the hotels where returned travellers are detained.

Prime Minister Scott Morrison’s spokesman said the federal health and defence departments were working with Emergency Management Australia “to expedite a request for assistance from Victoria”.

Hotel detainees and workers are believed to make up as many as half of the 141 active COVID-19 cases in Victoria, including 30 returned travellers who have tested positive.

Contact tracers believe a family cluster in the south-east Melbourne suburb of Hallam originated with a contractor working at the Stamford Plaza quarantine hotel, who brought the virus home.

Security guards employed at the Stamford Plaza, where 14 staff members have been infected, and the Rydges on Swanston hotel, where 19 were infected, have told The Age they were put to work without proper training in personal protective equipment or infection control.

There are already 28 Australian Defence Force personnel assisting with the pandemic response in Victoria. The state government agreed to this in March when the enforced quarantine program in Melbourne’s hotels began.

Federal Health Minister Greg Hunt said on Wednesday there was no blame to be laid in the Victorian outbreak, but that all states were reviewing standards in hotel quarantine.

“This will become an increasingly important part of our defence mechanisms,” he said. “We have [to] ensure that those standards in hotel quarantine are absolutely at the highest level.”

On Tuesday, Victorian Opposition Leader Michael O’Brien called on the state government to accept the offer of ADF assistance, noting that military personnel had been deployed in NSW quarantine hotels.

He accused Premier Daniel Andrews of “refusing to take action [when] the answer is staring him in the face”.

“We’ve seen lower rates of transmission in New South Wales than in Victoria,” Mr O’Brien said. ”In Victoria we’ve seen clusters around quarantine hotels. Not just from the returned travellers but from the private security guards.”

“They have been described as the SAS of infection control,” he said.

A Victorian government spokesman said the contact tracing support from other states “will mean we can get even more tests done and results back quickly – and a stronger effort to remind Victorians if you are sick, stay home and get tested”.

With Michael Fowler and Noel Towell