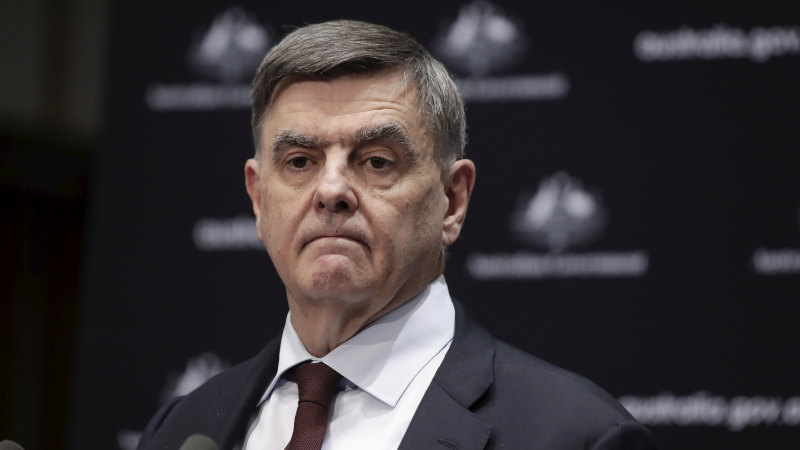 “These staff have been advised to stay at home while we review and adapt to the latest health advice and prevent unnecessary movement in and out of those areas,” Services Australia general manager Hank Jongen said.

The Community and Public Sector Union said it was “exceedingly concerned” the workers had been stood down, and they should instead be offered paid leave.

The edict followed a statement from the Australian Health Protection Principal Committee on Sunday, which said those municipalities – Hume, Darebin, Moreland, Brimbank, Casey and Cardinia – were of “immediate concern” because of increased COVID-19 transmission.

“The AHPPC strongly discourages travel to and from those areas until control of community transmission has been confirmed,” it said.

Amid concern about the implications of travel restrictions, the following day Professor Murphy clarified the recommendation was designed to prevent people moving in and out of the affected municipalities for gatherings and non-essential reasons.

“We’re not saying people who are already going to work from those areas shouldn’t go to work,” he said.

Victoria’s Chief Health Officer, Brett Sutton, also stressed the recommendations did not amount to a lockdown of local government areas.

“It is not a lockdown; there are not legal directions that apply to these areas and it is a very broad descriptor,” Professor Sutton said.

We’re not saying people who are already going to work from those areas shouldn’t go to work.

Chandler Macleod emailed contract staff, saying workers living in the six municipalities would be banned from going to work, even as it acknowledged the move would leave them without income.

“As a result of this advice Services Australia and Chandler Macleod are directing all staff that live in one of the impacted LGA’s to not to [sic] return to the office until further notice,” the first email, on Tuesday, read.

“In light of the short notice, Services Australia have agreed to pay impacted staff for their rostered hours on Wednesday 24th June, 2020.”

On Wednesday, Chandler Macleod again wrote to the affected workers: “As casuals we recognise the financial impact this has on you and as outlined above, we hope to have you back at work as soon as practicable. In the meantime we encourage you to look at some of the government benefits that you are most likely eligible for (ie JobSeeker).”

Overwhelmed with demand during the onset of the pandemic, Centrelink hired 5000 more staff. Of those, about 4000 were from labour hire firms, and 1000 hired directly as casuals.

Chandler Macleod is one of the largest firms operating in Victoria and Tasmania with Centrelink contracts.

One contract worker hired through Chandler Macleod said she was without pay after being ordered to stay home, and was deeply concerned about how she would pay her bills.

The woman asked not to be named out of fear she would lose her contract job permanently.

“We are exceedingly concerned by reports that labour hire firms like Chandler McCloud are standing down workers and directing them to apply for JobSeeker payments,” he said.

“The CPSU is continuing to call on the government provide these workers with paid leave.”

Chandler Macleod executive general manager Nick Gabrielidis said the situation was regrettable, but the firm had been given no option.

“On the guidance of the Australian Health Protection Principal Committee, one of our clients has decided to stand down employees that live in the recently identified COVID-19 hotspots around Melbourne,” he said.

“We are hopeful that many of these employees will be able to return to work soon, but that will be a decision made by the host client.”

So there are a couple of things to unpack here. The first is the question …