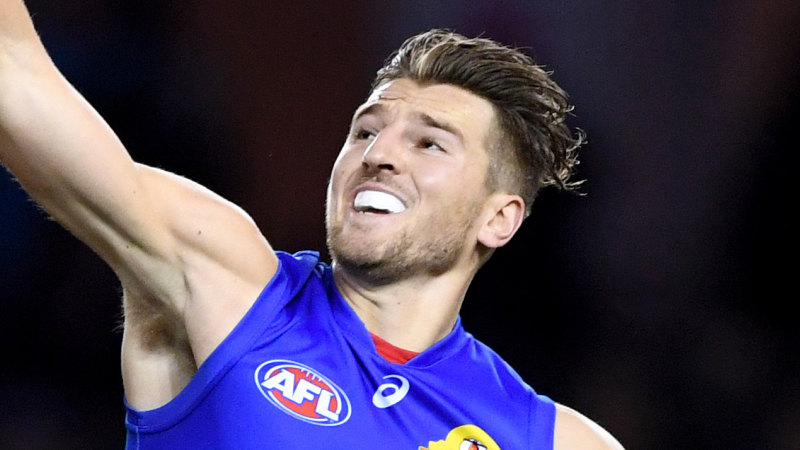 His first half was one for the books, although these numbers don’t do it justice: he had 12 possessions (10 of them contested), kicked two goals (one of them a booming set-shot effort outside 50) and a series of courageous contested marks – the clear highlight his against-the-flight effort to steal a ball bound for Isaac Heeney.

“He ignited us. That mark going back with the flight, the force he hit that with, if you’re not inspired by that as a teammate, you never will be,” coach Luke Beveridge said.

“I thought he was quite brilliant in the first half and really solid after that. He was really productive and had an influence.”

By the long break, the Bulldogs were 30 points up and the Swans had only a goal to show for themselves, having been torn apart repeatedly in transition.

Kennedy, meanwhile, had an uncharacteristically quiet start. He had just two touches in the first quarter and, in the third, he inadvertently sent a clearance kick down the throat of Josh Bruce, who went back and stretched the Dogs’ lead out even further.

The Swans wrestled back the momentum, though, and Kennedy (who finished with 19 possessions) made up for his earlier error by booting a goal himself in the last term. He was instantly mobbed by his teammates, who tried their best to seize the moment, but they couldn’t quite hold off the Bulldogs for long enough, and a late soccered effort from Jack Macrae doused their hopes.

“You can’t get off to a start like that,” Swans coach John Longmire said. “We didn’t use the ball going forward as well as what we could have. We didn’t play with the speed that we needed to and we didn’t adjust quick enough and they get you on the counterpunch on the way back.”

While they faded a little, the Bulldogs did finish the game with just two fit men on the bench – Aaron Naughton (ankle) was forced from the field in the opening term, and Sam Lloyd (shoulder) in the third, with Beveridge unsure of the extent of either injury.

For the Swans, their best was Tom Papley, who booted four goals in an electric display up forward – but the lack of a key-position target was once again painfully apparent. The sight of a limping Aliir Aliir at the death was salt into the wound, but the post-match news about Sam Naismith, who suffered another career-threatening knee injury, was a dagger in the heart.

Kennedy was clapped off the field, with the memory of his late grandfather at the forefront of everyone’s mind on Thursday – including Longmire, who owes the start of his North Melbourne career to him, after meeting with the master coach at the local Chinese restaurant in his hometown, Corowa.

“It was on a Tuesday, it was in the middle of the season and I couldn’t believe that he took the time to come up and see me,” he said.

“I was lucky enough to spend a couple of years under him as an impressionable 16-year-old from the farm and I couldn’t have had a better first coach – just a really quality person who had amazing values.

“I’ve never seen a person command a room without saying anything as much as John Kennedy senior. He was just the ultimate person, a great human.

“Josh found out this morning. I spoke to him a couple of hours afterwards and he just had that attitude … ‘it’s what granddad would have wanted, get on with it’.

“Josh has got an amazing ability to do that and you’d imagine now he probably takes a deep breath and takes it in a bit more.”